After having been struck down for a sexist consequence to the first semi prediction that does not belong in the 21st Century, there will be no dishwashing this time. Instead, the loser of this prediction has to watch Eurolaul 1993. 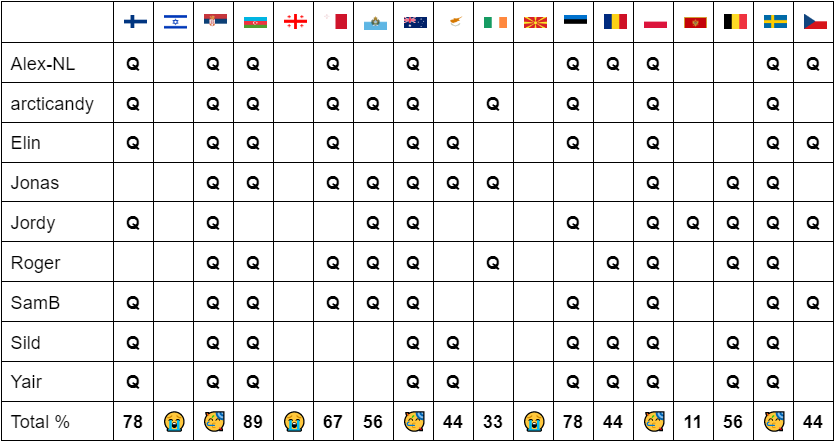 What do you think?
Posted at 17:54:00 No comments:
Email ThisBlogThis!Share to TwitterShare to FacebookShare to Pinterest

Posted by Sild
Is it okay if I just predict seven entries to qualify tonight...? I'm somehow struggling to find enough entries that feel like actual qualifiers, but I guess someone will just have to do it, Isis Gee style. Just with less teeth.
Let's attempt anyway - can I beat the 8/10 I got on Tuesday?
1 Sweden | It's just miles above the others today, if it's not winning this semi you can call me a tapir with a dentist appointment. That bit in the second verse where the beat kicks and the blinking lights - soooo good, get your geese out!
2 Poland | Watching the whole thing at yesterday's dress rehearsals I actually thought there were much less effects than I'd expected, but I guess that's got more to do with my expectations. The song and performance leaves me relatively cold, but juries will surely love all the pseudo-artsyness. And we've seen what Poland can manage in a televote too when it clicks.
3 Estonia | This leaves me quite cold too, but I need something to put third... I imagine it will do well tonight, only to get completely forgotten in the final, which is about what it deserves too. Competent and forgettable.
4 Australia | Usj. Barely a song. But at least he didn't rehearse the cry yesterday. Very well sung, so all those jurors that think Eurovision is like Idol will surely send him through very safely. Particularly since it's Australia. Hopefully televoters will have more sense!
5 Finland | Less well sung, but also needs it less.
6 Serbia | I'm less taken by this than most seem to be, but it's quite mesmerising either way.
7 Romania | It's absolute rubbish of course, but delightfully silly and cheerful, and could sneak through thanks to televoters being that way inclined.
8 Cyprus | Now it's starting to get tough... I've really liked this all season, assumed it as a safe qualifier (despite not being an UPTEMPO BOP), and think the whole shell thing looks quite nice on stage. But she looks very very bored, and isn't exactly packed with charisma. Could it lose out after all?
9 Azerbaijan | Not much of a song and not much light, but it does have a great drama-build towards the end. Instinctively I'd say it's a non-qualifier, but the juries need something to vote for...
10 Belgium | Surely another jury save, I wasn't at all convinced by this in the dress rehearsal.

11 Israel | Very nearly put this in, as it is rather struttastic while also being complete garage. Oh, did I say garage? I meant garbage.
12 San Marino | Seems to be the one gaining some momentum over the last few days, but it is still the same rather lame song it's been all along. I'll be relatively pleased to be wrong though, it's colour tv of the highest order, so would be a decent addition to the final. And I'm not going to be that person that compares it to Måneskin, nor that person that says "well actually he was around long before them".
13 Czechia | 🥒
14 Malta | She's not doing anything wrong, and I like it quite a bit, but at the dressrehearsal it mainly struck me as long (hvis det er lov å si).
15 Georgia | I didn't think it was possible, but it's actually worse than Black Mamba.
16 Ireland | It'd be nice for them if they qualified, and it's all perfectly decently done, but urgh, the song is really getting on my nerves. It's... just not very good, is it?
17 North Macedonia | Repeating my Bulgaria strategy here - it's just too obviously coming last to manage to come last.
18 Montenegro | :-(( My second favourite tonight, and unlike Denmark, where we were at least two people, I think I'm literally alone in the world on this :-((
Posted at 17:53:00 No comments:
Email ThisBlogThis!Share to TwitterShare to FacebookShare to Pinterest
Newer Posts Older Posts Home
Subscribe to: Posts (Atom)