Posted by Yair
Two magical weeks in Portugal have come to an end. I'm happy that Toy won, even if soon enough it will annoy us to no end (not that failing to win would have stopped it - just look at Dancing Lasha Tumbai).

As for next year, for everyone's sake, I really really hope - and this is coming from a Jerusalem native - that Tel Aviv is picked as venue. Jerusalem is simply not suitable for today's Eurovision life, especially during the weekend. Anyone coming to stay for more than a few days, I would recommend staying in Tel Aviv anyway and taking the high-speed train, if they finish building it by then.

Israel is expensive, full of rude people and has no city as beautiful as Lisbon - but it is a unique and diverse part of the world, with great food that caters for every flavour (if you're into bacon, contact me, I know some places) and a very competitive quality of service. Having been among the ~25,000 people in the Israel Calling concert this year, the country can have a fantastic Eurovision buzz when it's into it, and I recommend going if you can afford it. Basically - airBnb is your friend. Uber is not, but there are other taxi and car sharing apps you can install. More on this when the time comes.

(and that's just the breakfast)

Now, let's revisit what I've written here over the fortnight, starting with where I was right:

I was right that Lithuania is qualifying. If you placed a qualification bet based on my rehearsal reports, you are welcome.

I was right that Toy has been the winning candidate all along - winning is about peaking in the right moment, not during rehearsal or even a semifinal. Fuego, though masterfully presented and rightfully earned Cyprus' best placing ever, has never convinced me it's a strong enough song.

I was also right that the calorie count of pasteis de nata is about equal to a casual stroll in the extremely hilly Lisbon. My weight is unchanged.

And what did I get very wrong? Plenty of things, most notably Hungary's potential to win the semifinal, only for them to scrape through it. It was my Deli mistake all over again - non-English Rock songs don't have much appeal outside the fan universe, I guess. And I'm going to make the same mistake in the future, so feel free to remind me.

I was wrong about the stage. It looked good when it mattered, when audience is involved. Well done RTP.

I was also wrong about Lithuania, if you've placed a top 10 bet based on my rehearsal reports, then I deeply apologise.


On behalf of me and my ESC Nation colleagues, thank you all for reading, thank you other fansites for the great atmosphere at the press centre, and thank you EBU and RTP for providing these facilities. 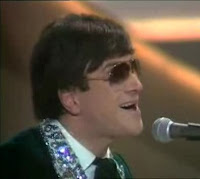