Winners and losers on Day 2

Posted by Martin F.
So there we go, we've now seen all 16 of the first semi-finalists, and of course we all know exactly who's going to qualify for next Saturday night. Right?

It's been a funny old day really, because most of the rehearsals have kind of confirmed what we already knew. With that in mind, I'm calling today's winners as Russia in particular, who put themselves in pole position to win the semi-final; Hungary, who were vocally really solid and whose staging includes some of the most impressive use of the video wall we've seen yet (and not one mention of dead kids in Gaza!); Denmark, because for all the song isn't really my cup of tea (who am I kidding, it's my #40 by some distance), they've basically delivered the same performance as in the national final and are going to get exactly the votes they were always going to get; and Georgia, who basically kicked ass. Nina is a scary woman, but in all the right ways.

Somewhere in the middle, we'll put Romania, whose creative use of scenes from the music video is offset somewhat by curious fashion choices and unimaginative lighting; and Belarus, who were perfectly solid (and as Roger said, Maimuna even smiled during the last run-through!) but a bit empty and uninspiring in the staging department.

Losers is a harsh term, but there's no denying that Albania delivered an underwhelming and confusing set of rehearsals, though things did get better towards the end (which is the point of rehearsals, after all!); and, I'm afraid, poor old Serbia, whose entire choreography and styling concept may well be in keeping with the message and vibe of the song - but what if that message is tacky and awful in the first place?

And with that, it's time for us to oximate in the direction of a Danube boat trip! "Viennese appetisers" are promised. Photos may follow if they turn out to be substantially better than our drawer full of Smash. See you tomorrow as the second semi-final starts to reveal its joys!
Posted at 19:00:00 No comments:
Email ThisBlogThis!Share to TwitterShare to FacebookShare to Pinterest
Tagged: Albania, Belarus, Denmark, Georgia, Hungary, rehearsal, Romania, Russia, Serbia

Well well. If you saw the Melodi Grand Prix performance, you've essentially seen the Eurovision performance. If you liked it then, you'll like it now and if you didn't, you won't.

In what may be deemed a very Germanic compliment: this is very competent. Black and white stripey floor and back-drop enhancing the 60s vibe, or the "Beatles revival" as the press blurb claims.

Third run-through and nothing seems likely to change. It's a bit like someone presses Play and they do their thing. Exactly. The. Same.

(I'm not saying this means anything but despite all that has come since, I'm still humming the Belarussian song)

Oh look, more breasts trying to escape from within their black wrapping. Quite a shaky (voice, not chest) first attempt.

Getting better, there's some nice steadicam work spinning around her. But overall still quite underwhelming. And for some reason Elhaida is wearing a glittery cape. Oh and the false ending doesn't really work.

We're getting there. Some nice lighting effects and her voice is warming up. So this is no disaster, but still one of the least impressive of all the rehearsals.

Solid first run-through here vocally. Suitcases at the front of the stage which just look in the way really, creating a barrier between the group and audience. Not sure about the singer's white trousers either. And the English second chorus really needs to go,

(I now have Anne Gadegaard's Suitcase in my head)

They have the video in the background with the children. It's mostly very monochrome and they just turned on some bright white lights in the press centre, presumably to make us feel like we're on stage, stars that we are.

We seem to be having an awful lot of run-throughs for no apparent reason. It's been equally competent every time.

So the Russians aren't the only ones who know how to stage something. Great lighting, backdrops, floor, everything. Again, predominantly black and white, with Nina dressed as a raven in hotpants. Some flashes og lightning in the floor which the Belarussians could have done with,

I do still expect Ruslana to appear at some point though.

She is quite a fierce warrior. But this looks great on screen. And a great pair of giant crying eyes behind her at one point.

And with that, today's rehearsal blogging is over.
Posted at 17:56:00 No comments:
Email ThisBlogThis!Share to TwitterShare to FacebookShare to Pinterest
Tagged: 2015, Albania, Denmark, Georgia, rehearsal, Romania

Posted by Roger
And we're off!

Big hair! Or rather, wild hair. For the first time we see Bojana without one of those turban thingies (technical term). This is just what you'd expect. Camp - with our singer wearing the main tent.

Roger never lies. This performance is no beauty. The backing singers start dressed in white, with a faint hint of Klu Klux Klan, and then when the beat kicks in they strip off to reveal something that Moje 3 wouldn't even have worn.

Oh, it's a hot mess. But hugely entertaining.

Ok, so I can't stand this song, but it is performed pretty well. The backdrop starts slightly oddly with a tree made of guns (!) but then at the end it becomes a normal tree in a shockingly green field and it's all beautifual and the world is lovely and such forth,

There really is not a lot to say. Boggie's vocals are a little bit struggling on the low bits in the first verse but other than that it's the performance you'd expect, especially if you've seen her perform it before. So yep. Rehearsals for nothing,

The only thing resembling thunder in the first run through was Maimuna's face.

The backdrop starts with a red heartbeat 'pulse' and then turns into white flashy things which I suppose are meant to be lightning. Predominantly red and black though, turning to blue by the end.

Quite surprised with the presence of a couple of guitarists and a drummer on stage. Polina in fine voice, some great use of the screens, white light pulsating everywhere. Probably, no, definitely the best first run-through we've had.

Yep, this is more than solid. Would be very strange if it doesn't win the semi.

God, I've even started to actually like it. Help!
Posted at 13:39:00 No comments:
Email ThisBlogThis!Share to TwitterShare to FacebookShare to Pinterest
Tagged: 2015, Belarus, Hungary, rehearsal, Russia, Serbia

A balanced diet is important

Posted by Martin F.
Other apartments' fridges have vegetable drawers. Ours has a Smash drawer. #approve 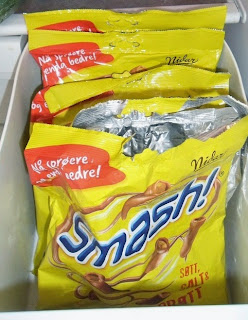 Posted at 11:57:00 No comments:
Email ThisBlogThis!Share to TwitterShare to FacebookShare to Pinterest

Posted by Roger
After a pretty quiet night yesterday, despite the tempting and not altogether unpleasant €2.30 glasses of wine, I am ready to blog day 2 for you, dear readers.

Much excitement!
Posted at 11:37:00 No comments:
Email ThisBlogThis!Share to TwitterShare to FacebookShare to Pinterest
Newer Posts Older Posts Home
Subscribe to: Posts (Atom)