Posted by Tom B.
And Italy decided to keep us waiting so we just start wondering why this may be. We believe she may be lost somewhere backstage and since she has no clue of any English she cannot communicate with anyone to tell her where to go and google all the maps can't save her. She finds her way however and therefore...

Italy
Well, you would imagine that due to their late entry they were trying to get things sorted. Well, "no" it seems is the answer to that. The vocals start off ok-ish, not great but not as bad as we heard in Germany during USFD but wait until the song progresses and by the end she is out of breath and quite bad. You may be forgiven for thinking that she is out of breath due to her energetic performance, but again this is not the case. In fact, for such a song you would imagine there is a bit of running about, some crazy gestures, something that may make you believe that her music video was something we were going to have a representation of on stage - again, no, Emma was calmly walking from one point to another making sure she doesn't break into a sweat. The only time she takes a moment away from her calm walk is in order to crawl accross the stage during the bridge, obviously making sure to avoid eye contact with any camera possible.

In regards to the background, the Italians have gone for black and white as main colours with gold as an accent. There appears to be a Greek-key motif early on. Later, the background starts using Emma's face singing the song. Mouths and Eyes also make appearances accross the displays on stage.

Emma is accompanied on stage by four musicians, all dressed in white and quite pleasing to the eye. They for the moment seem to be the best thing of this presentation. Hopefully round two will be better.

And unfortunately not. We are now in run three and the vocals are sounding a bit better but still not those you would be expecting from a professional artist. There is still no real eye contact with the camera. It seems that the Italian song is being used in order to showcase the ability of the stage designer rather than to best present the song. Oh well, it will work on the night of course *cough*.

Waiting now for the greatness that is Ruth Lorenzo. Will her recent sickness be noticable in the rehearsals?

Spain
What could Ruth do since she was not allowed to have actual water falling onto the stage? Well, make a graphic and use it for the show. The shot begins with a blurred Ruth appearing from what looks to be a rainstorm. This is complemented by the the stage looking as if drops of water are hitting an already saturated floor. In the first round there was a slight audio issue but Ruth kept it very professional and went through without batting an eyelid. The song was belted out and got a rupturous applaud in the room - but then again, many fans from Spain have now arrived and may have contributed significantly to the commotion surrounding the completion of the song.

There are four backing singers, unfortunately it is not possible to confirm sexes but I believe there is a mix. Will try and see if it is possible to confirm in following run throughs. All are dressed in black and do not prominently show against the mainly dark backdrop. This mainly black theme changes at the end of the song where after the bridge, the coulours flow into more dawn and later bright white background for Ruth who ends the performance enveloped in multiple spot lights to the point of disappearing from the camera view due to the brightness. An effect that works extremely well. This song has already started being a daily occurance at the karaoke nights, as is Quedate Conmigo. It is more than likely that Dancing in the Rain will add itself to the perennial karaoke nights accross Europe.

Run two and another impeccable performance. That might actually be a slight downfall however, Ruth is giving it her all and runs the risk of actually suffering later on in the week if she keeps on belting the notes out like she is for the rehearsals. In this run there was another audio issue, this time in Ruth's ear-piece. This time unfortunately Ruth was not able to hear the backing track and was not able to continue the song. Although the entry continued to be performed some of the lyrics were not sung.

The other two runs went better. There seemed to be no audio issues this time and as for the performance it was just as good as the previous. Will Spain achieve a better position than they did with Pastora? Comments are much appreciated in the Message Board.

And that is us, the rehearsal day has finished and we are now off to catch a bus and have some much needed rest and relaxation. Also maybe get some clothes washed might be a good idea...

Posted at 13:56:00 No comments:
Email ThisBlogThis!Share to TwitterShare to FacebookShare to Pinterest
Tagged: Italy, rehearsal, Spain

Posted by Tom B.
By the end of today we will have witnessed the rehearsal of the final six nations competing in the Eurovision Song Contest. There was a good party on at Euroclub last night which might explain the lack of visitors this early in the morning. Also it could be due to the song order and people deciding which acts they would watch and planning their arrival accordingly. And talking about the first act...

Germany
Not much excitement seems to be gathered in the press area for this song. Even though many accredited media are in Copenhagen, there is probably in the region of 150 people in the press tent even though the rehearsals today are closed and therfore may not be viewed in the hall.

In regards to the song, Ela's voice in a bit flaky and the staging is quite simple. A few bad camera angles but it was not terrible. The song however does not impress and even though probably most of the people gathered are German, there was no cheer, no clapping - just silence.

Onto round three and looking at the stage and the first thing the backdrop reminds me of is an American diner - and Elaiza is there to do the live band background music. In fact, that could probably the general mood of the song, background music, not really anything to pay attention to but not annoyed by it.

Update: In the final round we have an explosion of confetti and streamers! No pyro though - just as well, probably a bad combination. The girls however should also try and stop using so much hair spray, it seems they couldn't find how to get off the stage and needed assistance from the stage director. 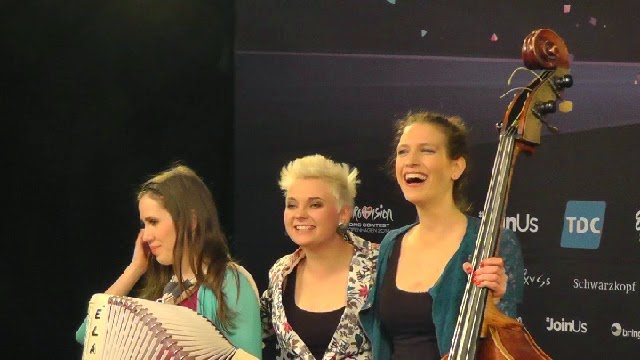 United Kingdom
Molly's voice is really good but unfortunately she had some problems with her in-ear and therefore missed a few lines due to it. The staging is black and white and the floor creates a flowery motif. Apart from the slight issue above, the song was performed very well in the first run through and was greeted with applause in the room. Recently we have seen the UK send the big names and not achieve their goals but this year it seems that common sense prevailed and we might see a very good position for the nation come Saturday.

Second run and it went better than the first. Another applause from the press area.

Onto the fourth run and we are now being promised pyro! And pyro we have! LOTS! A nice long pyro waterfall falling for the whole last chorus. A rupturous applause enveloped the room and loud clapping all around. This is becoming truly quite contenderish. 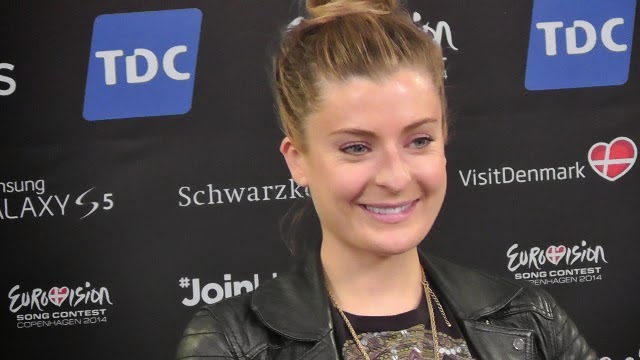 France
Well, vocally it appears there must have been a lot work done on the studio version since it sounds karaoke-ish. Patrick Biyik is topless and there seems to not have been much working on the dance routine since it seemed they were a bit confused on what came next. There are two backing dancers accompanying them - both dressed in white, one male and one female. These dancers seem to have learnt their steps a bit better but Lorent seemed to have thought the female should have been somewhere else in the bridge and pointed her where to be - which was wrong. After the first run, this seems like it will be one of those - love it in studio, hate the terribly bad live entries.

Run two and it seems they are a bit more secure of where they should be but not always. François seems to jump a lot, sometimes jumping right into the camera angle covering Lorent. Also noticed that the backdrop, which is mainly a drugged up dream of brightly coloured flshing moustaches, has central moustaches which quickly go through the flags of all the participating nations. It is at the speed of blink and you'll miss seven but they are noticed. Waiting to see what round three will bring us.

Run three and update about the backdrop. During the verses th backdrop is more of a mix of brightly coloured checkered blocks. The moustaches come during the chorus. Lorent takes a pretend selfie on his way back from the catwalk which he goes on with the female dancer. The song will still get votes but not as many as could have with a good vocal. Not sure if there will be another run and if so if any pyro would be included. It is a song which could allow for pyro but have the French requested it?

Fourth run and unfortunately no pyro to be seen but there was another incorrect camera shot right at the end. This time the camera flying accross the ceiling was in position to take a shot from the front however another camera was used to take this and therefore the shot consisted of the prominent ceiling cam and Lorent in the background of it pointing to the audience. 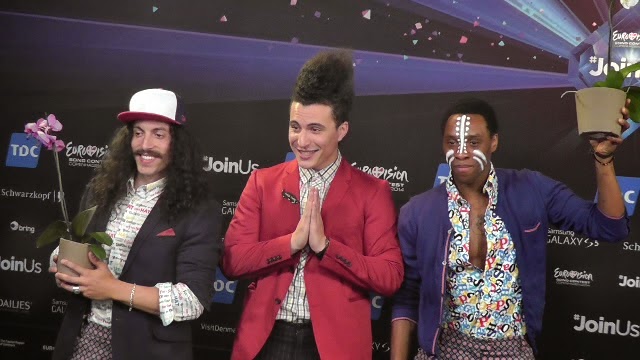 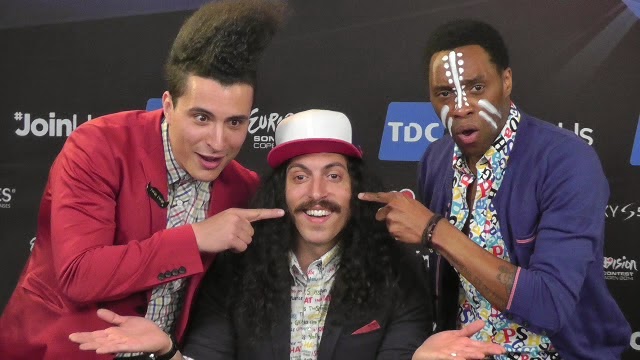 Denmark
One needs to be very careful of what one says about this song. It's like saying something bad against Jedward or One Direction, you will need to change your name and break away all contact with your family just incase you put them in danger. Basim and his friends are in costume for this, all wearing suits with red ties or bow-ties. Basim has a bow-tie for those who care.

Vocally he does well and the act blends well. The staging is like the Dansk MGP with golden hues in the backdrop. Basim plays with the camera and keeps your attention. Liking this but not loving it. Still, don't think it will be fairing badly.

Second run and it went just as well as the first. Not really anything important to add.

Apologies for the delayed update - was at Elaiza's press conference which was full of people. Getting updated on the happenings of the third and fourth round of Denmark's rehearsal and I hear there is a bit of pyro and a massive flag in the red and white colours of Denmark but not the Danish one as per DMGP but of Basim's face. Well, this is interesting and works extremely well... *cough*. Hopefully the team will realise that maybe a gimmick which worked well for a Danish act in Denmark will not necessarily work for a European audience. 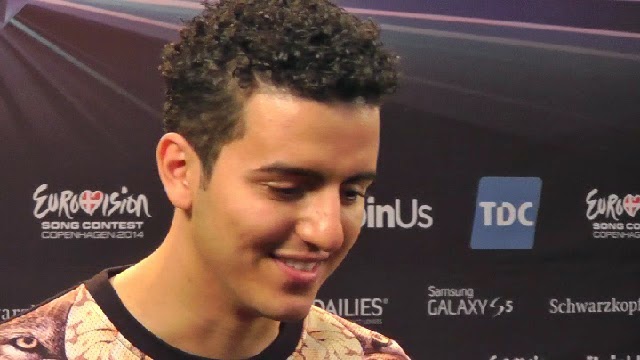 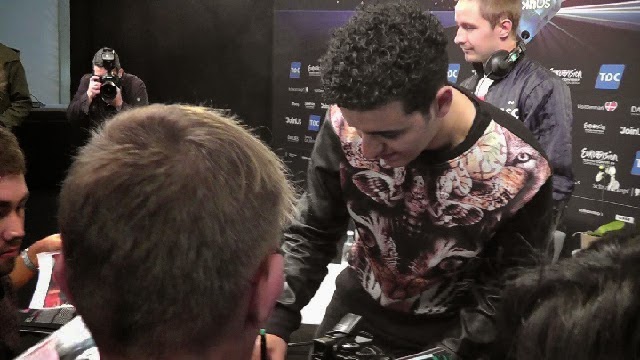 A break from the rehearsals now and it is off to Molly's press conference.