Posted by Roger
Semi-half of death
Some golden shoes feet and light
Seen it before much
Posted at 21:13:00 No comments:

Winners and losers on Day 4

Posted by Martin F.
All 17 of the second semi-finalists have now graced us with their planned performances for next Thursday night, and it's time to judge which of today's countries can be classified as... (dramatic drum roll) ...winners and losers!

The day started with two winners back-to-back, as Israel delivered a charmingly goofy, sufficiently-but-not-overly-choreographed bit of fun that we so desperately needed after yesterday's darkness and misery, before Latvia returned us to a dark path but with a genuinely edgy and real-world performance (and that dress looks much better on stage than off it, trust me!). I'm going to put Cyprus in this category too, though I do worry that their performance appeals to me because I'm English and it's a very Anglo-friendly kind of vibe they're creating. Will they vote for it in Podgorica or Baku? And finally, and to my great surprise, I'm giving Poland a "winner" thumbs-up. It's not that Monika and her team are suddenly definite qualifiers or anything, but they have a different and distinctive staging and a visual narrative that viewers will quickly grasp - time will tell whether it's enough to counteract the averageness of the song.

Sweden are somewhere in the middle, simply because a pair of lederhosen and a new hat aren't enough to constitute "improvement". And Azerbaijan belong there too, because Elnur looks pained every time he sings, and they have some fantastic conceptual ideas but some quite bizarre ones too (I'm aware that those descriptions aren't necessarily mutually exclusive in a Eurovision context, but in this case they are).

Now I keep saying it, but I do feel bad according "loser" status to anyone - but let's bear in mind we're talking about reality vs. expectations here, rather than an absolute judgement. As such, the piercing vocals and lost little girl actions of Iceland weren't enough to offset the gorgeous "Northern Lights" backdrop; the seriously dodgy backing vocals and yet-another-blue-and-black staging of Switzerland weren't enough to offset a solid vocal and visual performance from Mélanie; and fan favourite Slovenia came across as surprisingly insubstantial and unable to offset the undertow of what preceded it.

So there we go! Off to get some food with Roger now, then it's back bright and early for... *consults schedule* ...hm, it says here we have to sit through the entire first semi-final over an eight-hour period. That can't possibly be right.


We'll also be starting to publish some of the fun interviews that Tom has recorded with this year's artists, so look out for that!
Posted at 20:28:00 No comments:

Posted by Roger
This will be a test. Our first five-song session!

And we have a delay:

ORF have decided to stop the clock on the Swe rehearsal time as they calibrate the projection screen,it's not quite right yet. #eurovision
— Kris Boswell (@KrisBoswellRS) May 14, 2015


So there we have it. Essentially the MF performance, with red and white light and the same routine and interaction with the animated guy (albeit a different animated guy).

Essentially the national final performance is the Nordic motto this year.

A couple more runs and some minor changes to a few camera angles and such forth. Very much going through the motions. Waiting to see what SKANDAL the Swedish press manage to make out of this....

The most surprising thing was seeing Måns sweat, I thought he was a superhuman who didn't.

Melanie in a white dress with blue cape, with another foresty backdrop. Good vocals on first run through. Backing singers are doing some drum banging. It could almost be 2005.

This is very blue.

"I'm walking in the darkness". Yes dear, it's called the Eurovision 2015 stage.

Some dry ice has been added to the beginning added to the fairytale forest image, and in the final chorus we get some sort of geysirs exploding. I always liked the song, and I think it is looking good on screen.

This is one of my favourites so I am totally biased here. LOVE!  Starts in black and white, the backdrop goes starlit sky and then there some fireworky things. Got my first goosebumps of the week.

Trying some different kind of firework graphics second time round, less obviously fireworks and that's probably better as they come on the "I should have been there for you" bits.

It's a big giant awwww of a song. That is all.

Well that was predictable. Trying to be all Nordic, they're doing the NF performance. And as with the Nordics, nothing new meant it felt a bit underwhelming maybe. At least there was no blue. Gold and yellow is the main colour here.

I realise I'm starting to repeat myself. Competent. Solid. But it does feel rather tame. Maybe expectations were too high. Some here are more impressed, others are even questioning the qualification. So as usual, we know nothing.

There is maybe too much wind machine. Marjetka's hair is a right mess at the end of the third run through, And Raay is struggling to click his fingers in time with the music.

Was it really necessary to bring two backing vocalists along just to sing one line?

OK, this is a lot of nitpicking. It's still my fave song.

Monika is centre-stage in her wheelchair, which gets "revealed" at the start of the first chorus. Three backing singers, and a piano on stage with her. Singing well. Purple and pink blossom on the back wall. Similar colours to the Oslo 2010 logo.

Good vocals, but the song is still deadly dull. Monika blows us a kiss at the end of the second run.

This thing has an audience, and the performane certainly sells it to this audience without ever risking winning over anyone else. I just hope this audience are sitting in front of their TVs next Thursday.

Monika appears to be quaffing a sizeable G&T between each take.

OK, so now I'm just thirsty. That'll be all from today's rolling blog.

Posted by Roger
Last day of semi-final first rehearsals. After yesterday's sea of blue and dark let's hope for something a bit more cheery today. And if Israel can't deliver that, they're doomed for all eternity. So let's see...

Luckily once the song gets going, it becomes yellowy golden with some purple. Nadav is in a suit and golden shoes which have wings (didn't Jedward have them too?)

So he does look a bit angry, especially on the slow "mama" bits, but it is coming together. The dancing is somehow more Greek than Israeli, you rather expect an OPA! to come. The ending is really good, partly because he relaxes and gives us his cute smile and then the final shot is a polaroid pic of Nadav and his backing boys taken from above. Rather like the ones he posts on his Instagram with his selfie stick.

And talking of his backing boys. Hello!

We've had several instances of cameramen on screen here, running away not quite quickly enough. Easy to fix, but not a problem I've noticed at any of the other rehearsals this week.

He's smiling more on the final run and there was some pyro. This ought to be sailing into the final.

Now that's how to use the stage and backdrops! This looks really lovely, reds and whites, with Aminata in a red dress. Slightly thin vocals in the verse, but choruses work well with three backing vocalists adding some depth.

This is really looking great. Some excellent overhead shots, with nice floral-ish patterns on the floor. And the kind of church window effect on the backing wall does give the whole thing quite an ethereal and spiritual feel.

They're trying out various angles here, but they nearly all look good. Her dress (which may look strange on its own) also fits into the images in a lovely manner. Singing still good. This really should make the final, but it could just be a bit too offbeat for the masses.

Many furrowed brows around me. That was a bit underwhelming.

Great first how, with Elnur in silhouette and a full moon above him. Then *ta-dah* a topless male dancer is there and then a lady dancer joins and they gyrate around rather unnecessarily.

Particularly the first sight if the male dancer is very distracting. Elnur is singing well, and we are back to hidden backing vocalists after Israel and Latvia kindly had theirs on stage.

The only thing I can say for certain after this rehearsal is that we won't be going to Baku next year.

Actually the best bit is right at the end when, for no apparent reason, a dove flies across the graphic.

Well this has divided the press room. Some whooping and clapping and lots of "ouch my ears".

The stage does look great. Greens, blues and oranges in swirling a northern lights way. But the vocals were a tad shrill, shall we say. And she looked very little and lost on the first run.

Better second time. Still looking better than it's sounding. And I think this is the inspiration for the backdrops: 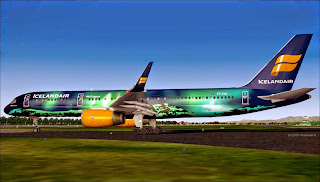 Still not working for me, she just comes across as angry and screechy. Also IT COULD HAVE BEEN FJAÐRIR.
Posted at 11:57:00 No comments: