Posted by Tom B.


A short walk from base camp for the next two weeks is the Wiener Stadthalle, mecca for homos Eurovision Fans from across the globe. 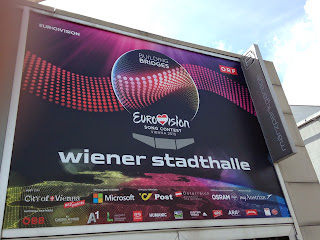 Before the rushing and dashing which will certainly not be in short supply tomorrow, we went to get the badge sorted in order to not have too much hassle in the morning. It seems it was a good idea:

It appears that many of the photos submitted have not made it to the Accreditation Centre's system. The volunteers will therefore take a picture of you should you be included in this group. Ensure to take heed of this should you want to go and pick up your badge moments after landing from intercontinental flights or have forgotten to shave for a period of time not long enough for it to be seen as a kept facial statement but too long for it to be a sexy stubble. Still, some people don't mind this look on them, some of them also film a music video in this state, ironically saying there was only one thing they should have done ... I would beg to differ - razor in hand - on this 'one' thing but we hope we have time to bring this up with the person involved in due course. 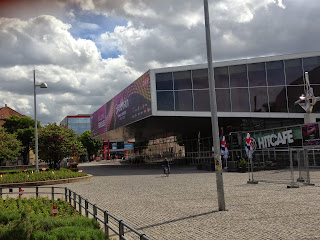 For those who travelled with the masses to Copenhagen last year, friends, the suffering is over! The venue is surrounded (well, has many around) by restaurants and different eateries to choose from. Secretly I will miss the chicken pasta with green pesto though, that kept us going through many a drama.
In regards to this already famous bag - it really does have waaaay (yes, it is spelled like that when it needs to be) too much stuff! Thankfully some of it is edible but if you really want to take this back with you, ensure you don't have too much weight outbound. Also, the bag itself is really quite small (it is already full when given out) so grab another bag if you're still on your way to Vienna. You can then use this other bag as a second carry-on instead. Check with your airline's policy however before flying in order to confirm if two carry-on bags are allowed. ESC Nation does not accept any responsibility for your misinterpretation of the rules. 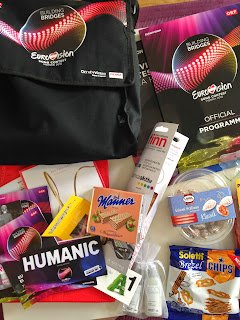 So what is left to do today? Preparation for tomorrow obviously, but also eat, relax, save and recharge the batteries: we all know how this goes - it's a twisted game we put ourselves through annually. This battle year after year to survive the two weeks is quite a feat. Websites against  Websites for quickest and best content, F-accredited individuals running after delegations to try and get promotional items, delegations and artists hoping for original questions to pop up in interviews and the question on everyone's lips: What will Valentina Monetta be singing when she is shown on tv to announce the result of the Sammarinese vote? Sources say she has been living in London now for a while. Could this be to improve her English in order to not become a second Belén? 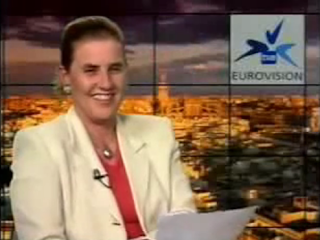 Posted at 17:19:00 No comments:
Email ThisBlogThis!Share to TwitterShare to FacebookShare to Pinterest
Tagged: Vienna

Posted by Tom B.
An English saying states that with age comes wisdom. You would therefore be led to believe that this year being my tenth Eurovision Song Contest pilgrimage, I would be a wise old fool! Sadly, just like Željko Joksimović's entries, the number increases but the tune remains the same - leading you down the path of despair which you know is coming but you cannot avoid. Months of healthy eating - gone, weeks of planning - deleted, days of thinking all was sorted - just shattered dreams, and welcome once more the last minute panics for taxis, parties and the all important airport dash!

Going to a preview party the night before leaving for the host city should have rung some bells from the start but like the true soldiers of Eurovision love that we are, we thought pulling an all nighter in order to accommodate all was going to be simple. It could have been were myself and ESC Bubble's Daniel Lynch not captured in our less than fully-functional mental capacity by non-stop Geordie Shore on MTV at 2:00am.

Realising time was quickly approaching, a last minute roundup and shove into suitcase tactic was adopted, completing with a bodily requirement, shower and shave and it was off to the airport to board our flight. I am unaware of how it is in airports in your vicinity but Amsterdam Schiphol loves making you do everything while attendants rush about their busy day of (assumed) gossiping and (allegedly) sleeping with Captains on stopovers from their outbound long-haul. First you have to check in on a machine, then choose what boarding card to print (mobile or paper), then go and do your own baggage drop off, have it fail a couple of times, remove overweight items, try again and hope you didn't screw the tag up, all of which while the above mentioned attendants stare at you in a game of chicken on who is the first to point out the possible need for help.

No sleep usually can be directly correlated to crankiness and this was definitely true in the case today but a thankfully uneventful hour and a half flight was enough to catch a few open-mouthed moments of sleep. Vienna appears to be quite a regulated city, the people and services seem to be very efficient. For those still on the way, we would recommend just getting the normal train into town, much cheaper (€4,20) and only an extra 15 minutes or so from the fast one. Things are well signposted and it's not difficult to find where you need to go - we managed to get to our apartment with no backtracking! The only thing we noticed which we could see an improvement on, the U-bahn has one entrance for the line, and it depends on the left or right platform which direction you will be going in. At least from the ones we saw (U3 and U6), they don't seem to have a list of station names in the direction of your train to help while you're trying to make the quick decision should you be in a hurry. In London these would be clearly visible when you get down the stairs but this simple idea does not seem to have made it to the Viennese system.

Now, we are just having a quick rest before going to the madness that will be our home for the next two weeks. Pictures of the goodies in the bag have already been making rounds on Facebook. We've had our first views of the accreditations, and before you know it, we will have our first rehearsals, press conferences, interviews and drunken shenanigans at events too! Will we be facing our shadows? Or will be shining lights (you just know mobile phones need to be charged during Semi 2)? We could be heroes, warriors and if all else fails; oximated (still having trouble understanding what is meant by this)... but whatever happens throughout the next two weeks, we know that we are blessed by being given this opportunity each year and therefore a big thank you first off to all those organisers and helpers at EBU for giving us this platform. In the tried and tested words of many a host and at least one scary little girl in the year 2000...

Posted by Roger
Preparing all my logistics for tomorrow's journey to VIENNA. And very happy to see the city's public transport company has a special tab for us. Hooray!