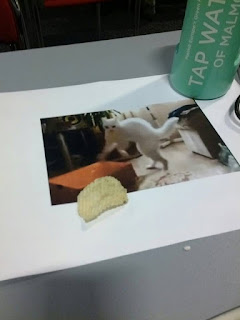 We're getting ready to watch the second dress rehearsal of semi 2, nicely situated in front of one of the big screens in the press centre. With us is also a nice printout of mad cat.

We'll update the blog throughout, so watch this space!

And we are on, with what seems to be a philharmonic orchestra of dancers on stage. Not quite sure what that means, but then I'm not quite sure what's happeneing either, so... It turns a bit more street as the dancers literally slide off the stage and are replaced by bikers (Ola & Barbro?) and more dancing. They somehow manage to turn the stage into a laptop at some point, which looks a bit cool.

Petra shows up to welcome Europe, to which the band Europe (or HEAT or Generic Swedish Poodle Rock Band) briefly pop by, and she's in a rather hideous dress. It somehow looks like ballgown where someone decided to lift her skirt to have a look at her mad cat, so to speak.

LATVIA - Giraffes in their postcard? I might have to start to like this... The glittery boys seem even myre hyper than normally, which I guess makes sense, as they probably feed off the audience. But there's little doubt the audience don't care... The dreaded stagedive is indeed taken care of by stageworkers rather than the audience, and frankly, it looks shit. All in all it works quite well, and it's arguably the best possible draw for this, but I still can't see it happening.

SAN MARINO - Valentina Mousepadetta is looking particularly distressed today. Other than that, it looks pretty much like it has all week, and she's in good voice. The 02 San Marino caption in the bottom left seems to be double - was this case during Latvia too, I wonder?

MACEDONIA - It is still double for Macedonia, at least... Lozano has now lost his glasses (which have come in various shapes and colours over the last week), and is apparently so scared of dropping his earpieces that he's plastered them completely. He's actually looking quite dishy in a simple black suit, singing excellently and seems very sincere about it all. And Esma is Esma, of course. Great stuff, this - would be lovely to see them make it.

AZERBAIJAN - I love the second shot of this, where we start off with Farid in profile, and then he turns towards the camera. Sadly, he almost always misses the camera with a tiny smidgen each time - GAH. Vocally strong as always, and this is bound to do well.

FINLAND - Krista seems to have recovered from her cold, which is good for her, less good for us, that may have to suffer the constant dingdongs again. The backing singers have clearly done like me and visited the local hairdressers, and are now sporting some kind of 50s hairdos that Aliona Moo would defeinitely approve of. I thought she messed up the singing a little for the keychange, but not in a way that matters. There's pink confetti, pink kissing and a manic DIIING DOOOOONG at the end - this should be popular in the Northwest, but presumably far less so elsewhere.

Petra tries to be funny, but somewhat fails, when introducing Lynda Woodruff, who is now after Finland, for some reason - not between entry 13 and 14 like in the previous rehearsal.

Like in the 2008 postcards, the butterfly flags sometimes have us guessing what the next entry is, and we think the next one up is Peru.

PERU (or MALTA) - Gianluca looks cheerful, but nervous. Which might not necessarily work to his disadvantage, actually - it somehow makes him across as human, and the human factor and his boy-next-door charm is a big part of the appeal here, I assume. In that respect, it would come across as a nice breath of fresh air after Finland's madness, but that effect is somewhat spoiled by the break.

BULGARIA - The postcard features lots of drumming, unsurprisingly. And if I haven't mentioned it before, the postcards are great in general - especially with acts like this too, where we get an extra chance to get to know them outside of the 3 minutes on stage, and what they're all about. Which for Stoyan and Elitsa is clearly 'banging things'. For one that hates this, I think it comes across quite nicely - it's different, they know what they're doing, and the light-heavy stage gets to shine in all it's glory with lots of flashes along with the beat.

ICELAND - We're back in the black suit, which is a good decision, I think. The simple, but powerful, performance comes across great after the Bulgarian banging - I think I know where the Norwegian douze is heading, at least!

GREECE - The lead singer was struggling to find the right cameras when we first zoom in on him, which makes him look a bit befuddled for a moment. Finding several later on, though, to great effect, I certainly felt that he was looking right at me. And I wouldn't mind that... Great chemistry, and this is obviously sailing through, or maybe even winning the semi. One of the band members had some earpiece issues towards the end, making it bounce about like mad around him, but I doubt that will cost them anything.

ISRAEL - Not much to say about this compared to before, except that she's apparently stolen Zlata's massive butterfly ring! The drama! Good draw for this too after Greece, and absolutely nothing wrong with the singing. Juries should adore this, the question is the televoters - personally, I think quite a few of them will too.

ARMENIA - A massive COUGH or something appeared out of the blue during the first chorus, what the hell was that?! It didn't look like it came out of any of them... I think this is coming across very well considering the fact I find it a nothingness of a song. It seems sincere and 'proper', somehow - no butterflies, no giants, no pink kisses, just them doing what the should, and doing it well.

HUNGARY - ByeAlex is looking rather terrified and worried for some reason, and not just in a hipster-I'm-standing-here-in-my-hat-singing kind of way. The guitarist is loving it, though, and even got some cheers from the audience during a little instrumental break. Alex himself is finally finding some cameras throughout, to great effect, but I fear this might be a bit too introvert and, well, Hungarian for most other viewers than those in the Nordics in this semi.

NORWAY - Unlike Hungary, this is eye-contactastic. She's pretty much finding all the cameras, looking into them with the right mix of happiness and coldness, and even smiles at times. And thanks to her arms, and not to mention the stage and lighting, the moment when the first chorus kicks in is the moment of this Eurovision for me. If this doesn't qualify, I'll bite someone.

A break with an "interview" with "Farid" after Norway, and Petra suggests she will be talking to 'someone we don't know yet' - could it be Lys?

ALBANIA - The Albanians have been spotted at most of the parties over the week, so they're obviously making the most of their experience. And I have a feeling they wouldn't be too bothered about not qualifying either - they seem confident enough about what they're doing and who they are, and this, like Armenia, feels very real. Well done, lads!

GEORGIA - Calculated, cold, loud - and fecking effective. But lo behold - were they a bit off during the MASSIVE notes, or was that just me?

SWITZERLAND - We heard rumours they'd been told to not wear the shirts with the slogan on, but they're still in them, so that might have been all lies. Lead singer has lost his glasses, though. Maybe someone sat on them. There is some kind of charm in this, but I think it would've worked better with a shorter song. Or less clothes on the Gygax.

Petra looks wonderfully bemused after Romania - is that why SVT put them on last?

San Marino goes for a pretty early bit of their song in the snabbrepris, which is a surprising choice. Some of the long shots used for Azerbaijan are also less effective, but the part of the song makes perfect sense. Bulgaria chose som random verse - why, dears? Well if it keeps them from qualifying, it's fine by me!

Petra seems to be flirting with Cezar in the greenroom, before sitting down with Moran Mazor to introduce the Eurovision history lesson. God, the 80s were amazing! 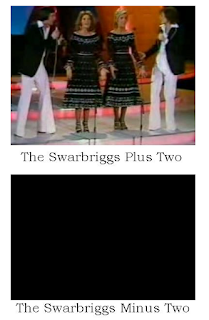 And we have a second recap, in which Valentina Monetta indeed throws her cape and we have a beat! Makes sense in a way, when there are two recaps, and you have two different songs...

Europe show up again, as Petra announces the final countdown. Silly, but I like silly :-)

Darin is cuuuute, btw. He starts off slow at the piano for his recent hit Nobody knows, but it quickly turns into the fab, well-produced pop track it is. On a different note, he appears to be wearing a Swarbriggs Minus Two t-shirt!

He's followed by Agnes, who's dressed in lots of flaring fabrics. Clearly an interval act aimed at the local audience more than the international, but as many broadcasters cut to ads anyway, that's makes perfect sense. And unlike the dancing in semi 2, it gives the audience something to cheer for. Which they do - judging by one of the screams when she finished, Adelén is there and liked it a lot.

And after having France, Spain and Germany waving from the audience, we have our random qualifiers announced:

Unfortunately, we can't be in the press centre this afternoon, so we advise you to check out Martin's live blog on esc-chat.com

We'll be back tonight for the jury performance. Stay tuned!

Posted at 17:56:00 No comments:
Email ThisBlogThis!Share to TwitterShare to FacebookShare to Pinterest

And on a side note.. Anouk has finlly released the videoclip to "Birds"