Posted by SamB
After a busy first day of rehearsals, it's time for a little break. And what better way to get your breath back than to spend a few minutes looking at pictures of attractive boys and deciding who's the hottest? It's a tough job, but someone's got to do it.

The second semi-final is between Israel's Imri, one of the pre-contest favourites, and Alex Florea from Romania, perhaps a surprise to have made it this far. But as we saw today, surprises can happen in this game.

Imri made it to the semi-finals after topping his group with more than half the votes. He then went on to easily defeat Manel Navarro in the second round (lots of Mirela fans voting there, it seems), and then knocking out another favourite, Robin Bengtsson, in the quarter-finals. Meanwhile Alex Florea also won his group, though that was a group where two people voted for Jacques Houdek as their Eurovision hottie. Alex then easily beat host Oleksandr Skichko in the second round, before meeting Finland's Lasse Piirainen in the quarter-finals.

Once again, it's now up to you to peruse the photos below, choose your favourite and vote in our Twitter poll. Votes will close on Monday evening. 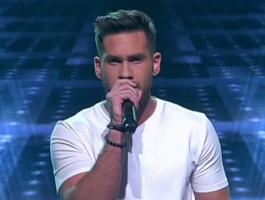 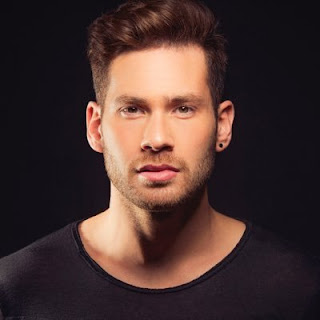 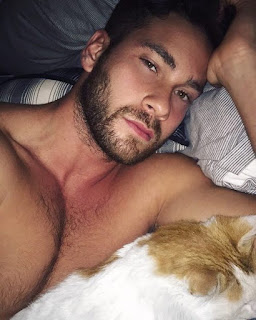 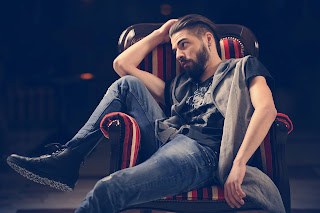 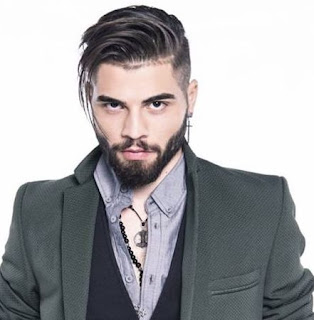 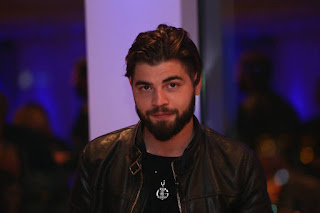 Make sure you follow us on Twitter to see the results and all our updates from Kyiv.
Posted at 21:17:00 No comments:

Posted by Roger
Some days are easier to sum up than others. So let the haikuing begin!

Contrasts, it's all about the contrasts.

They are using the little satetllite stage amid the audience for the first time. Think Anouk in Malmö. Backdrop is the Dutch forest without the witches of Eastwick.

There is an inherent risk with having him standing in the middle of the audience that there could be a lot of distracting flags, but I think it will work and look really good seeing him amid a sea of people. Maybe they could drop some of the long shots - they could either add atmosphere and look amazing or be an awkward boisterous contrast to the soft song.

Have to say I'm glad it will be Salvador singing, not keen on Luisa's interpretation.

And that was it for the first day!  Now I'm off to find whatever it was the Azerbaijanis took.

So, they have a concept. Of some sort. What. The.

Words, there are no words.

Waiting for the second run-through. Maybe it was all a dream?

So. She starts surrounded by walls, or giant blackboards and she gets some chalk out at one point and starts scribbling like a possessed primary school teacher. Next to her there's a man up a ladder wearing a horse's head. Then the walls come down, the man up the ladder takes off his horse's head. The backing singers appear, do some moves. Dihaj looks angry. She gets the chalk out again and scribbles on the backing singers' backs and....I really don't know. Such a busy three minutes.
Posted at 14:51:00 No comments:

Lots of swirling blue lights that turn red by the end. Some sweeping steadicam shots and an appropriate close-up of the piano-playing hands at the start of the piano bit. Not desperately interesting really.

I think I want this to be a bit more special, but it does what it needs to and is certainly a contrast to what comes before. It is, dare I say it, competent. Oh dear.

Ah, they added some dry ice, which adds to the mood nicely. It's very classy, again contrasting to what comes before. And I like the way the colour changes almost without you noticing it. And the floor graphics combined with the dry ice look really good.

Not completely sure about Leena's vocals, maybe a tad shrill.

Now, a little break before the last two of the day.

If someone could teach Blanche something about confidence and stage presence...

Oh lordy me. After a series of quite dull performances, this comes across as kind of amazing. Saturday night needs this.

At one point Slavko lies on the floor on top of a huge close-up of his face on the video.

He struts, waves his braid and camps it up in exactly the way you'd expect. After some quite run of the mill entries to start this semi, it really wakes you up.

Hidden backings, this was vocally fine (for what it is) except for a falsetto moment. Goodness knows what the juries will make of this.

The stage is a danger zone in which Blanche is all alone, with her mic stand.

This was rather dull on first run through, just standing there with a few bits of arm choreography. Lots of white beams of light. Hopefully something more interesting will happen in later run-throughs.

There was a very long gap before we saw another run-through. And the hand moves are very awkward and she looks so so scared. Vocally just about OK (edit: apart from THAT note just then) and some nice lighting effects could lift this. Maybe.

The best thing are the floor lights. Really.

Too many easy jokes to be made here about being in the danger zone and losing it all. Make them yourselves.

Posted by SamB
Do you follow ESC Nation on Twitter? If you do, you might have been following along with our Eurovision Hotties World Cup, our mission to find this year's hottest (male) Eurovision contestant (or host).

We started with 32 guys in contention in the group stages, 16 of whom made it through to the knockout rounds. Now, after the round of 16 and the quarter finals, four competitors remain.

The first semi-final is a battle between two very different hotties, as fresh-faced innocence from Austria takes on the personality and charisma from Italy. Francesco came into the competition as one of the favourites, but hasn't had an easy journey to the semi-finals. It was tight between him and two of our hosts in the second round and the quarter final, and in both cases he only just squeezed past Timur Miroshnychenko and Volodymyr Ostapchuk. By contrast, Nathan's had a much smoother run, which culminated in beating Hovig with almost 75% of the vote in the quarter finals.

Take a look at the photos, and vote in the Twitter poll below, which closes this evening. 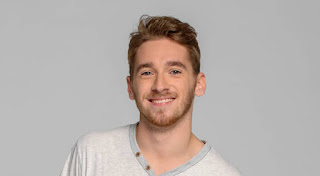 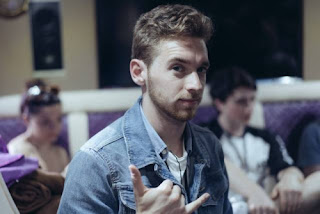 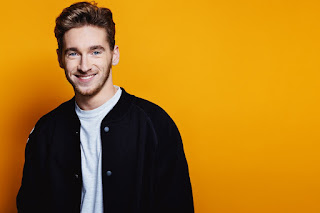 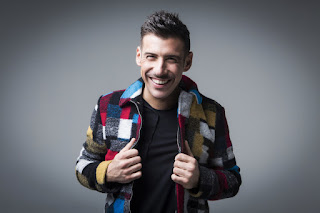 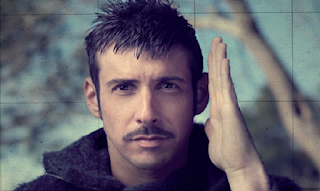 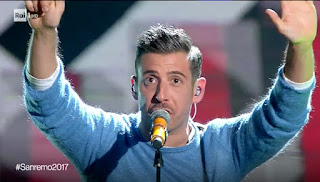 (We initially intended to introduce shirtless pics at this stage of the competition, but, well, there aren't any. Not that we could find anyway. If you know better, please send them our way on Twitter or by letting us know in the comments.)

Vote, and make sure you're following us on Twitter for the results!

So, what will Isaiah be sitting on? He said it will be something he's never sat on before...

And it's a round bit if moderately elevated podium that rotates. So that was an anti-climax. Hoping it will do something else in later run throughs.

Towards the end here there is a great overhead shot, with the round podium in the middle and some great lighting/graphics. Other than that this is all a bit meh. And there are some distracting close-ups of Isaiah on the backdrop.

I take that back, some of the images of him look really good. But this one disturbing moment which zooms in on his eye.

He's dressed in black with a long grey coat, for those who care. And he's in fine voice.

Final run through - now we have pyro. A whole damn pyro curtain, and then some.

They've swapped rehearsal order with Australia. Something to do with a choreographer.

Some graphical elements from the video, ships in the sky, clocks and dials. And for those of and old-fashioned persuasion - backing vocalists in view!

Lindita is clearly feeling the song. But she's also clearly not a morning singer. The backings are great though.

Still, the main problem is the lack of actual song. Last place maybe?

Tamara centre stage, starting with mic stand before she starts getting more physical with her singing. Lots of red, fairly non-descript lighting and graphics.

Fashion update: In jeans and a t-shirt, so presumably not her final outfit. But for the second run through she was in a red cape. But not really a superhero cape. More like a net curtain.

She can sing though, and lovely backing vocals too.

And we're off on time. There's no sound on the screens here (told you so!), but we have a picture and - gasp! - it's just like the MF performance.

Those of you with a certain inclination will be disappointed to learn that there are no steps for Robin to ascend as he enters the stage, resulting in a less enjoyable rear view.

We now have sound, and it's sounds just fine (another shock). The lighting is maybe a tad pinker than in MF, but other than that you're know what you're getting here.

*****
Good morning from the press centre.  It's the first morning of rehearsals and I will be blogging my impressions today. They come with the usual caveat that I am generally wrong.

Now let's see if we start on time. Five minutes to go...

Walking the streets in Ukraine

Posted by Roger
Not a lot to report today, but accreditation has successfully been picked up and the hotel room-venue journey timed, meaning tomorrow morning will bring with it effortless and stress-free travel!

It's just four stops on the metro from the city centre to the International Exhibition Centre, so the logistics are pretty easy. And a single ticket on the metro costs about 15 eurocents, so little to complain about there!

This afternoon's activities involved having a lot of sushi for lunch, doing a very small amount of sightseeing, and sitting drinking coffee. It's a hard life. 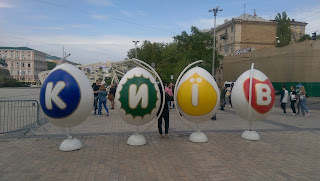 The first morning of rehearsals tomorrow will no doubt mean some kind of issue with something or other at the press centre. Most likely there won't be sound on the monitors for the first run through of the first rehearsal, but luckily it's Sweden and we already know exactly what we're getting there.

Congratulations, I have arrived.

Posted by Roger
OK, so I'm not Silvia Night. A little bit of me would quite like to be though.

The first thing the taxi Uber driver said to me as we drove away from the airport was: "The traffic in the city will be chaos because of this, you know, Eurovision." "Ah yes, that," said I. "Nice weather you have here."

Next thing I noticed was a chain of petrol stations called Wog. If only they knew (or maybe they do?).

Posted by Roger
Well that seems like a suitable enough, Eurovision 2017-related subject matter. I can't promise every post in the next couple of weeks will be equally on point.

But yes, I am Kiev-bound and ready to wriggle my way back into the rehearsal bubble for the first time since, erm, Vienna. And that really only feels like the other day. Was there a contest last year? Who won?

My mission is to bring you insightful and witty observations as the rehearsals start to unfold, and I'm already trying to think of a whole range of ways to say "the stage is blue": Hopefully I won't be out of ideas by Sunday tea time.

And should the history book on the shelf decide to repeat itself - as per the ancient Swedish proverb - there might be a haiku or two. But also there might not be. You'll just have to keep coming back to the blog to check.

But now, to misquote Mélanie René, it's time to fly. 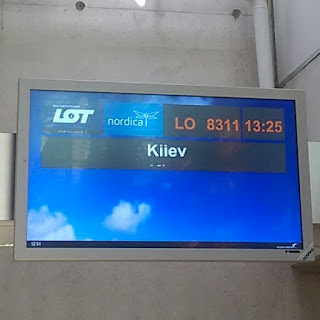