Posted by SamB
The below is my thoughts of my experiences last night at the Hammersmith Apollo for Eurovision's Greatest Hits, the EBU/BBC production for the 60th anniversary of the contest. It was a delightful evening, and I'm so pleased to have seen so many winners and stars sing their songs in the flesh.

First up, I'll say that it was a remarkably high-quality production. Visually it looked amazing in the theatre, and I hope that comes across the TV. Certainly doesn't suggest that the BBC 'don't care' about Eurovision, and I'm sure if they hosted any time soon they'd make a great job of it. 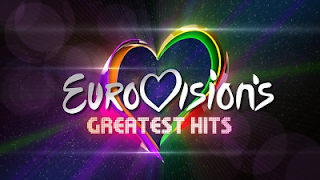 The make-up of the audience was very interesting. I was expecting it to be mainly 'people like us', i.e. very dedicated fans, mainly gays. But it really wasn't. There was a real mixture of people, at least up where we were; probably about a 60/40 gender split, plenty of husband/wife couples and groups of girls. I did get the impression there were a decent amount of 'new' fans, the Australian girls in front of us being a key example of this - jumping up and screaming for clips of the more fun entries, particularly Verka and Jedward, loving Conchita and dancing to the older, more 'stereotypical' winners, but having no idea and not caring abouts acts like Anne-Marie David and Natasha St-Pier.

You could very much tell how many die-hard fans were there when Petra offered us 'a warm hello'. About 50 people got the joke.

Okay, on to the acts (from here there are a few spoilers, so avoid if you don't want to know what happens).

Firstly Electro Velvet, who performed as part of the warm-up act, in what I think was a very good decision, to give them as much opportunity as possible to perform in front of large, loud audiences. In all honesty, it wasn't easy to hear their performance as the sound wasn't great at this point, but I thought note-wise it was fine, but Bianca in particular was struggling with the song's long phrases by the end, sounding weak and trying to catch breath. If they can't sort this out, I'm seeing a very low position for this in Vienna.

Emmelie de Forest
A good choice to go on first - sang well, got a decent reaction without anyone really loving it, I felt.

Anne Marie David
One that I wasn't necessarily expecting much from, having heard clips of some of her performances at fan events in recent years, but she was excellent. A 50/50 version of the song, which was quite delightful to hear, and the big finish we're all used to.

Herrey's
This is one of those songs that really isn't very good, but is very fun. And it was tonight. Full marks to them for still being able to do the dance routine. Completely in English except for the last chorus, if I remember correctly.

Dana International
Ouch. Flat *and* out of time with the band (everything tonight was played live by a band on-stage). This was more the 2011 Dana than the 1998 Dana.

Nicole
It seems the only language versions Nicole can remember now are English, German and Italian. She milked her applause for rather too long and had to be gently encouraged to leave the stage by a stage-hand.

Brotherhood of Man
I thought I hated Save Your Kisses for Me. I really quite enjoyed it this evening, and so did the crowd.

Olsen Brothers
Amazing to consider this was 100/1 in Eurovision week back in 2000. They got everyone singing along, and visually it was very good too, the first to have a real visual show (which meant aaaages beforehand waiting for it to be set up). I'm just a little disappointed we weren't told that we were the greatest public they'd ever had.

Interval
Here was a surprise. We got a proper interval act, with Riverdance. I still don't care about Irish dancing, but the Riverdance song is excellent.

In the actual interval (a 15 minute break) they played other interval songs over the PA, including Rainmaker and Free, which I thought was a cute touch.

Lordi
A sensible choice after the break, both for giving them time to set everything up, and for getting the audience back into the show again. Obviously went down brilliantly with the audience, and everything smelt slightly of burning.

Natasha St-Pier
A very good performance (switching to English from the second verse), but somehow very underwhelming. A decent amount of people clearly didn't care, and you could hear people talking during this.

Dima Bilan
Firstly, the boos. They started as soon as Petra introduced Russia, and were clearly about Russia, rather than Bilan. They tried filming the intro again (cleverly going into it quickly after some applause to not give the audience chance to boo), but I suspect it might need some over-dubbing. Bilan himself was fine, a medley of his winner and second placed entry. I thought it was a little underwhelming - again, clearly one of the least known and liked songs among the audience.

Bobbysocks
Fully in Norwegian except the last chorus. A lot of fun as always, and probably a good choice to get things back on to a positive note after Russia.

Loreen
Fabulous performance with lots of people tangled in sheets. Probably the biggest reaction of the night.

Johnny Logan
A medley of all three of his winners, all of which I love, and another good reaction.

After Johnny Logan we went up to Graham Norton in the crowd, who was interviewing Lys Assia. They had two or three goes at this, partly because Lys wasn't sticking to the script, and partly because the tiara they'd got for her was too small. It'll be interesting to see how much of this ends up in the final cut.

Incidentally, while they were filming Lys, they were setting for Conchita, and something on the stage caught fire. This meant we got to watch a video of the New Seekers while they replaced the pyro element on stage.

Conchita Wurst
Predictably fabulous. Great vocals and fire around her (which seemed a bit lame from above, but will probably look great on TV). Had an interview with Petra and Graham afterwards, the only one to do so, where she plugged her new album and introduced a video message from the Vienna hosts. I don't know what they said, because the Australian girl in front of me 'fucking hates the one on the right'. I never fully established why.

After this we got a 'special surprise', and Anne Marie David came on singing Hallelujah. After a verse and chorus we segued into Herrey's singing Volare. I assumed at this point that each of the acts were going to contribute to this medley, but no. After Volare we got something I can't remember, and then Dana International and Conchita came on together singing Waterloo, joined by all of the other acts singing together for the finale.

All in all, I really enjoyed the evening. I was worried it was going to be a little half-arsed and crap, but it really wasn't. I felt like there was a great atmosphere and everyone was genuinely having fun.

And they played Contrazt at the after-party!