Close to the borderline? A Semi 2 Prediction

Posted by SamB
I found Semi 1 quite difficult to predict, as my 'results' showed, with only seven correct out of ten. In Semi 2, however, I see far fewer surprises, and am quite in agreement with the bookies.

There are nine entries that are considered safe qualifiers by the bookies, and they're the nine I would put in without hesitation too. The only question that remains for me is around Georgia.

Until rehearsals, the Georgian song was considered a complete outsider, with no chance of qualifying. And despite really liking the song, I was fully on board with this. But rehearsal reports have suggested that it looks fantastic on stage, and several bloggers have placed it among their qualifiers for tonight.

I'm still not so sure. I still think it's just too difficult, too inaccessible, too 'not Eurovision' to get through a semi-final. A great visual performance can lift a song, but it's all too easy when watching rehearsals to forget to judge songs as just that - songs. We get so familiar with them, we end up evaluating them as 'better than before' or 'better than I expected', and losing sight of our initial impressions. And my initial impression of Georgia was 'great but doomed'.

So, on to my prediction

1. Ukraine - I never really saw this as a winner, but I've been talked around by the bloggers during the last week, and am now feeling it could pick up a big swell of votes during the semi (I still don't see it as a winner on Saturday though)
2. Australia - I always found this bland and overrated, and no doubt I'll be underwhelmed by it tonight, but it seems to be pressing the right buttons for people in Stockholm.

3. Belgium - a really tough prediction for 3rd, it could be any of Belgium and the three below it here.
4. Latvia
5. Serbia
6. Bulgaria - I don't quite think Bulgaria have Same Heart-ed this up, as much as anything because Poli has a lot more about her than Mei Feingold did, and a much less disjointed song in the first place
7. Israel - seems like an obvious qualifier now, so I'm pleased that I had faith in it when it was out at 3.1 to qualify
8. Poland - kinda predicted by default here, I'd be quite happy to see it miss out, and not shocked either
9. Lithuania - what I said for Poland
10. Norway - I'm still really curious to see if this works. I think it's great, and it should do well, bu it really could fall very flat, particularly if Agnete doesn't nail it vocally. And that then opens the door for Georgia or one of the others.

11. Denmark - hoping my instinct on their live performance will be right
12. Macedonia - it sounds like she's been nailing it through rehearsals, but I still doubt that's enough for such an old-fashioned (though amazing) song
13. Georgia
14. Albania - boring but has friends
15. Slovenia
16. Ireland - boring and doesn't have friends
17. Belarus - seriously, who's going to vote for this? Yes, it's got gimmicks, but when they're this ridiculous and the song this bad, do people vote for gimmicks, or just laugh at them and move on?

18. Switzerland - not so much the last of her kind, just last.

Posted at 13:02:00 No comments:
Email ThisBlogThis!Share to TwitterShare to FacebookShare to Pinterest
Tagged: Georgia, Norway, predictions 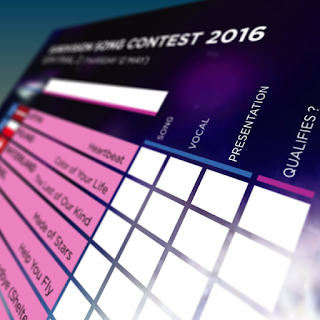 Today SVT will present the second semi final to the world (and Norway). Which means that every self-respecting Eurovision afficionado should make sure to have these nifty scorecards printed out and ready for judging tonight's show.

You can download the scorecards here
Posted at 12:45:00 No comments:
Email ThisBlogThis!Share to TwitterShare to FacebookShare to Pinterest

Posted by Sild
Or I guess this is part uno of the oppholdsvær prediction, as the Tuesday one was a rainy one...? Either way, it's Eurovision today!!

I correctly predicted 8/10 in Tuesday's semi - annoyingly, the two qualifiers I missed out on (Croatia and Azerbaijan) were entries I've seen as obvious, safe qualifiers for months, but got convinced by rehearsal reports were a bit doomed. Their qualifications were fully deserved, and I changed my mind again while watching (and then managed 9/10 – still thought Iceland would do it instead of Malta). Croatia in particular sounded much better than I expected, and much to my amazement she'd suddenly developed personality! And Azerbaijan was far from as horrible vocally as reported, and it looked really good – excellent use of the screens.

So, how wrong will I be tonight? Let's have a look!

1 Ukraine | Don't think this is a Eurovision winner, but should be able to win tonight. Might be a bit divisive for some at home, but televoters don't have negative votes, after all. And pretty sure the juries will wet themselves (even if the Russian one might disagree on Saturday, periscoped or not...).
2 Australia | This is all a bit bland and disappointing for me, but it seems to work.
3 Bulgaria | Not seen any clips of this, and only one (very dubious!) photo, but even if they're not nailing the staging, the song itself is strong enough this should work reasonably well. Vote vote vote!
4 Latvia
5 Belgium | Very lucky draw for this, and I doubt it'll do much in the final, even with a similar draw there, but even I am starting to not hate it... :-o
6 Israel | I've had this as a likely (if borderline-ish) qualifier ever since we got the new version of it (well, new song, really, several bits of the melody is actually completely different), and most others seems to have followed suit during rehearsals, so upgrading it to a safe 6th.
7 Lithuania | This has seemed relatively safe all along, but I've also had a little bet on it to not qualify. As much as anything, it's one I can't really see who will care about, even if it's pretty strong and performed well. Also, LOSE THE PERM, DONNY.
8 Poland
9 Serbia | I assume the juries will love this, but not quite as sure about the televoters.
10 Norway | Hm. Thought it was a safe qualifier and possible top 10 in the final when it was chosen, but have since gone off it a bit. Not that I think she won't perform it well, or that her lack of promo will matter at all, nor do I think the tempo change really ruins it, it's just that I don't really think it's quite strong enough as a song. I would've predicted it out had Romania still been in, but I think it's sneaking through now. Only to do a Tooji in the final or so, perhaps...?

11 Macedonia | Kaliopi is obvs giving this her all, presumably securing reasonably good jury support, as well as a good bunch of friendly televotes, but I don't think her song is good enough this year to make it. Maybe a platypus version would help?
12 Albania | I looooved the original version, and quickly grew to loooove the new one too, but I'm sadly not expecting the world to agree :-(
13 Denmark | So inoffensive I'm offended.
14 Georgia | Reports seem to suggest this is doing much better than previously expected, but then 'previously expected' was about 19th, so...
15 Belarus | Will probably manage to scrape up some points just for being a bit... Belarussian.
16 Slovenia | Aww.
17 Ireland | Who's going to vote for this, seriously?
18 Switzerland | Smokey armpits, great idea there, The Rajkka...
Posted at 11:30:00 No comments:
Email ThisBlogThis!Share to TwitterShare to FacebookShare to Pinterest
Newer Posts Older Posts Home
Subscribe to: Posts (Atom)