Posted by Roger
Man lost on the stage
Jazz hands outperform pumped arms
Where's the unicorn?
Posted at 21:38:00 No comments:
Email ThisBlogThis!Share to TwitterShare to FacebookShare to Pinterest
Tagged: haiku

Posted by SamB
As Day 4 in Kyiv draws to a close, all 36 of our semi-finalists have now rehearsed, and as always, these days have brought us some winners and some losers. Some songs have leapt up in our estimations, whereas others have drifted away.

(And yes, this is with the proviso that these are only rehearsals, some singers are holding back, others have got days to practise standing on one leg etc etc etc.)

Belgium - oh dear, it seems like what we'd been worrying about at the preview show performances has come true. Blanche just doesn't have the personality to pull this one off. Instead of commanding the camera, she's trapped in the middle of an empty stage. We can't see six qualifiers coming from the first half of this semi, so will Belgium be the one to miss out?

Ireland - after so many years of coming with bland, uninspired performances, Ireland have finally turned up with a concept this year. However, it doesn't seem like they know what to do with it. A real missed opportunity because, if they'd got this right, it would have turned what was always a borderline qualifier into a potential Top 10 finisher.

Israel - performing last in the semi should be a gift for a song like this. It'll no doubt come alive (pun intended) in front of a live audience in much the same way Beauty Never Lies did in 2015, but for now Israel is more Tooji than Golden Boy. There's even whispers of a possible NQ going around the Eurovision bubble. 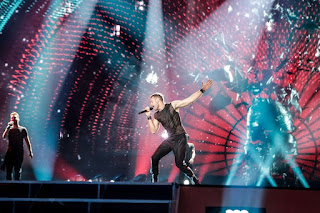 Slovenia - the fan and betting communities have always been united in calling this a non-qualifer; it's spent the last few weeks further out in the odds even than the Czech Republic. The rehearsal was something of a surprise therefore, with a strong vocal performance coupled with strong imagery that makes the most of the stage. With Latvia coming across as an absolute mess immediately afterwards, Omar could feel like the natural closer of the semi-final, and hoover up the votes from juries and televoters alike.

Croatia - we always said that the only chance that Croatia had of making it through the semi was to make the performance of My Friend fun and ridiculous - more Cezar than Axel Hirsoux. Unfortunately, it's seemed like Jacques was far too po-faced and wrapped up in the serious artistry of the whole thing to even consider that. Pleasingly, someone in the production team has considered it for him. The performance with the camera shots from both sides is just quirky enough to work, and the massive double-Jacques heads on the background screens add just enough camp to draw the audience in. A potential qualifier now? 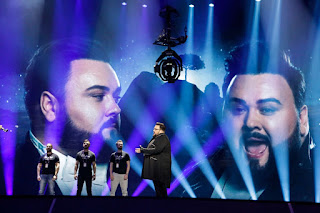 Italy - he hasn't even rehearsed yet, but these have been good days for Francesco Gabbani. Every time another favourite rehearses, his odds shorten. With Blanche faltering and Bulgaria proving more Francesca Michielin than Dami Im, victory is looking more and more assured for the Italian.
Posted at 20:07:00 No comments:
Email ThisBlogThis!Share to TwitterShare to FacebookShare to Pinterest
Tagged: Belgium, Croatia, Ireland, Israel, Italy, Slovenia

Imri is in black (or rather translucent), singing just about adequately. Not as much choreography as I was expecting. Two dancers and some backing singers.

More literal graphical interpretation for the 'walking on stars' and 'hour glass' parts. And Imri on the back LED breaking into pieces.

It's rather underwhelming. Nowhere near as much impact as Golden Boy. Someone here even mentioned a word to send fear into all Israeli supporters: "Tooji."

The jury final will be quite key here. If he sings like today, he will be punished.

Staging is a mix of the Eesti Laul performance and Stig & Elina. Koit was a tad lost with some of the choreography on the first run-through.

Koit's acting skills haven't improved but I really don't think he's trying. It is a rehearsal after all. This should be fine once it all comes together.

Better for each run through. Laura in particular was very good.

Essentially the NF performance here, in red and black with some pyro graphics at the end.

Poor things don't even have Georgia to vote for them.

More blue lights, but with some rain effects. Kristian in black with white shirt.

Actually no, it's mostly black and white and he is swishing his hands about, so think there will be more stuff happening that we're not seeing yet, a la Dami Im.  At one point there are a few squiggles. It's still a work in progress.

Hmm, I think we were all expecting to be wowed and it's...just nice. Should be safe for a top 5 finish though.

The return of white clothes and blue lighting. They are standing on a boat. Not really sure why.

Shots of various buildings on the backdrop, giving the effect they are flying slalom on their boat. Maybe it's a plane?

They dance a bit towards the end, distracting from the repetitiveness. Vocally solid.


***
The after-lunch session. Let's see how much they show us in the press centre...
Posted at 12:39:00 No comments:
Email ThisBlogThis!Share to TwitterShare to FacebookShare to Pinterest
Tagged: Belarus, Bulgaria, Estonia, Israel, Lithuania, rehearsal

Yesterday was blue+white day, today is yellow+purple day.  In this case the yellow is the singer's dress and mic stand.  She's on a giant plinth with steps which she descends. This could get precarious with the long flowing dress.

Vocally just about adequate. We're back to the hidden backing singers.

They don't seem to want us to see very much in the press room today. We've only seen half a run-through of this after only one or two of the first three. We've usually had three or four of each song.

And back to normality and more or less a carbon copy of the MGP performance.

Lots of purple light and not a lot going on in the middle section. There's a risk everyone will spend these three minutes talking about Croatia.

There is some live backing vocal here, but also the digitalised voice thingies to some extent.

It's competent. But maybe a tad dull.

Long time since there has been so much laughter in the press room.

Let's get the vocals out the way first - they are perfect.

Jacques does the duet by looking left, looking right depending on which voice (and getting it the wrong way round at one point). It looks quite silly. And then there are some very camp hand movements.

Backdrop is sunflowers and rainbows. Strangely, no unicorn.

Three backing singers help out, both vocally and visually (particularly the one in the middle). It ends with a bit of Molitva-esque touching.

Valentina is in da club, wearing a baseball cap and with her little shoulder bag she didn't want to leave in the cloakroom. Jimmie removes his jacket for the final chorus to show us his arms.

Bright colourful staging, nice overhead shot near the start which sets the mood. Three backing singers on stage, they don't do any choreo but help out with the hand-clapping.

So the baseball cap has gone, but the handbag stayed. Yellow and purple lighting, excellent vocals and good chemistry. Still it feels like a very long three minutes.

Day 4 already, and today we'll get the rest of semi 2, starting with the double whammy of San Marino and Croatia. Technically that might be a quadruple whammy, I suppose.
Posted at 08:53:00 No comments:
Email ThisBlogThis!Share to TwitterShare to FacebookShare to Pinterest
Tagged: Croatia, Norway, rehearsal, San Marino, Switzerland

(Apologies that this did not appear yesterday evening, but there were technical issues related to cheap Moldovan wine)
Posted at 07:49:00 No comments:
Email ThisBlogThis!Share to TwitterShare to FacebookShare to Pinterest
Tagged: haiku
Newer Posts Older Posts Home
Subscribe to: Posts (Atom)