Posted by Roger
I'm going to try and sum up the highlights of every day with a haiku. Which is a foolish thing to attempt really. But here goes!

Winners and losers on Day 1

Posted by Martin F.
Hello everybody! I'm live-blogging the rehearsals with my escgo hat on this year, so I'm leaving the ESC Nation work in the able hands of Roger and Tom - but in addition to supplying the occasional photo and bit of colour from the press centre (and, of course, the traditional betting blogs next week), I thought I'd pop in at the end of each of the rehearsal days and give my quick thoughts on what we've seen, framed in terms of the "winners" and "losers" from my point of view.

For me, today's winners were Greece insofar as they delivered the most persuasive individual performance, regardless of what you may think of the song; Finland for coming across as a breath of fresh air; and Belgium and Estonia for giving us high-concept stagings that work well visually, though that means both will take some time to get right on camera - we'll see what the second set of rehearsals on Friday bring us in that respect.

Somewhere in the middle we find Armenia, which is still a confusing mess of a song (and the first minute today never quite gelled right even after several attempts), but which has some really effective moments on camera that use the video wall and floor to perfection.

The losers - to be understood in the sense of "compared with prior expectations" - include Moldova, whose police-in-hotpants routine just comes across as unpleasant and sleazy; Macedonia, where I can see what they're trying to do but it's still an awkward blend of under-rehearsed choreography and faux-R&B stylings; and, in particular, the Netherlands, who appear to have thrown the kitchen sink at their visual performance in order to distract from the song, except the sink has a leaky plughole and the hot and cold taps are marked "NO" and "YES" and the owner of the kitchen is a mad old bat with a fetish for funereal bondage gear. I mean really, what the fucktje.

So that's it for Day 1. It's certainly been a fun and varied start to proceedings! Let's see what tomorrow brings, from Bojana and Boggie right through to emigration and oximation. Till then!
Posted at 19:56:00 No comments:
Email ThisBlogThis!Share to TwitterShare to FacebookShare to Pinterest
Tagged: Armenia, Belgium, Estonia, Finland, Greece, Macedonia, Moldova, Netherlands, rehearsal

Posted by Roger
After a nice bit of ravioli in the canteen (with very friendly staff, well done), we're ready to rock and roll with today's second quartet.

There's actually very little to say about this. They do their thing, they are clearly having fun and that comes across very well. Plenty of dry ice and zooming in and out camerawork.

And a cute "thank you ladies and gentlemen" and the end of the third run through.

Fun fact: you can't hear the rehearsals in the toilet.

Anyway. Maria Elena can really sing, she's wearing a nice glittery dress and it is a fairly straightforward staging befitting of the song with a piano on stage and dark blue lighting. But the song. Is. So. Boring.

There is really nothing more to say.

Oh, having a fanboy moment. Have always loved this song but was a bit unsure how the staging would work. On the first run through it is very promising indeed. Some very cool overhead shots with silhouettes and just about the right amount of interaction,

All kinds of camera issues though. The overhead silhouetty shots seem to be causing problems, but the singers find the cameras and look suitably miserable.

Much improved now. That's what rehearsals are for!

Hmm, difficult one, this. Vocally excellent (like just about everyone today in fact), a really nice back-drop depicting a lovely corner of one of Skopje's parks, or thereabouts, with autumn leaves floating around. Presumably this is why Daniel is wearing a raincoat. However, there is some horrendous choreography (Daniel can't dance) which gives it the unfortunate look of a third rate 90s boyband (with his three backing singers).

Actually it's not really a park. More like a monument with columns. But it's autumn. And there are leaves.

Or maybe a mausoleum?

And thus ends Day One.

Posted by Roger
We're just about ready to go. Will update this post as the rehearsals happen. So don't be afraid to refresh!

So the first thing has gone wrong - screens in the press room weren't showing anything. Based on the 'official' video, there is a giant climbing frame prop thingy, which I assume will be used to great effect. And you've no doubt seen the pics of the police uniforms, Not mot more I can say really, so I'll go and get some more coffee instead.

Oh update to the update! We just got the last run through. Much grinding and booty shaking (close up of lady dancer there). There's a strip so we get to admire Eduard's torso for the last chorus. The police dancers are in PVC lederhosen. As you do.

Dark blue clothes, flappy arms and a wind machine (complete with giant animated tree blowing accordingly). They've put in some Nicki Frech-esque choreography for the time-ticking part of the lyrics. Why wouldn't you?

At one point a map of the world appears on the floor and the singers move to their respective continents. Subtle!

Vocally decent, if somewhat nasal in parts. The girls and better than the boys,

Well, it sounds better than it looks. There's all kinds of odd choreography from the backing group (who are Witloof Bay Juniors) and indeed for Loic himself. He was just going through the motions though (as it is, indeed, a rehearsal) and I reckon it will look good once they tighten things up.

The choreography isn't going down well in the press centre, but I think it works. It's a quirky song, and as such quirky moves fit nicely.

Mwahaha. Fashion disaster de luxe. But it does at least distract from the monotony of the song.

Where to begin? Trijntje is trying out different veils to start the song, as if she's planning to go to a funeral. But you wouldn't go to a funeral in THAT dress. Think Mando in 2003, but with even more cleavage. Backing singers also look an absolute mess. At one point L O V E appear on her fingers with some magic lights. Goodness knows what they were smoking when they came up with this (or well, I can guess).

Vocally competent, but there's so much visual weirdness you really forget the song.
Posted at 14:07:00 No comments:
Email ThisBlogThis!Share to TwitterShare to FacebookShare to Pinterest
Tagged: 2015, Armenia, Belgium, breasts, Moldova, Netherlands, rehearsal 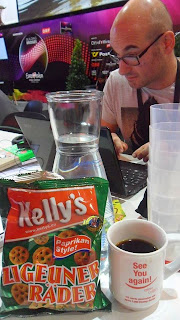 Your blogger Roger, hard at work, with the typical press centre nutrition in the foreground. Don't let them tell you Germanic countries only have paprika-flavoured crisps - they have "Paprikan style!"-flavoured crisps, too.
Posted at 11:49:00 No comments:
Email ThisBlogThis!Share to TwitterShare to FacebookShare to Pinterest
Tagged: rehearsal

Posted by Roger
Everything is going too well.

Did no one tell ORF that something is not meant to work on the first day?!
Posted at 11:12:00 2 comments:
Email ThisBlogThis!Share to TwitterShare to FacebookShare to Pinterest
Tagged: 2015, rehearsal, Vienna
Newer Posts Older Posts Home
Subscribe to: Posts (Atom)