Posted by Yair
Wörter, parole
Justice for Valentina
Please explain your song
Posted at 22:04:00 No comments:
Email ThisBlogThis!Share to TwitterShare to FacebookShare to Pinterest
Tagged: haiku

Pre-opinion: I got hooked on the snippet, the last times it happened were with Molitva and Heroes. This is as promising as it gets when it comes to winning chances, but there's still plenty of ways this can go wrong (including the stale NF staging).

First run-through: Black stage, black tight suits, red guitar, red shoes (that only reveal when the dry ice fades). I think it's a different backing track to what we've heard so far. For the Mercy Mercy bit the stage turns red and they go to the catwalk and do the hand thing, picturing this with an audience that does the same this could work really well.

Second run without fog. A much better staging than the NF, Madame actually looks at the camera for a start. Not sure it's enough to win this, but I'm hopeful.

I've had enough of black and red though. Seriously.

Last run through, this time the fog is back and blue light is projected on it (the sea?). Hurrah, another colour. They may win now.

Pre-opinion: This is one of the more powerful songs, keeping in mind that the magic from Sanremo can easily be lost with the wrong staging.

First run: We have lyrics on screen. Lots of them, in translation (but in more colours and overlaying than the preview video - some letters are made of images). Very very red stage.

Second run: They each walk a different bridge (during the "col sorriso di un bambino" bit) and meet for the ending in the middle of the catwalk. They're both great performers (as we knew) but the lyrics keep distracting me (which language is this? And this? And this? Was that Danish or Norwegian? Arabic or Persian? Hey I know this one, it's my language. Oh, Ermal is going waaaaaaahhh)
Posted at 20:36:00 No comments:
Email ThisBlogThis!Share to TwitterShare to FacebookShare to Pinterest
Tagged: France, Italy, rehearsal

Pre-opinion: This one actively annoys me, which is good news for Germany: Better some emotion than no opinion whatsoever as I had for their recently failed songs. And for every hater, there's a lover or two. So this could make an impact.

First run-through: Michael in complete darkness, yellow-ish projections start at the first chorus. Parts of the lyrics, family pictures (not his), a road and a home. Michael in good voice. Projections go crazy near the end with his body throwing shadows in spirals, and then it's red, and damn, I'm starting to like this.

Pre-opinion: One of the strongest melodies this year, but the hyperglycemic performances we've seen so far might turn people away. Especially now that Lithuania does sugar so much better.

First run-through: No pianos. They start out standing in two different time zones (very Waterfall) in a dark stage, then getting close and holding hands. Amaia in white, Alfred in burgundy. Not much happens, apart from them touching each other in different angles.

To give you an idea of their choreography, this is how they move about on stage: 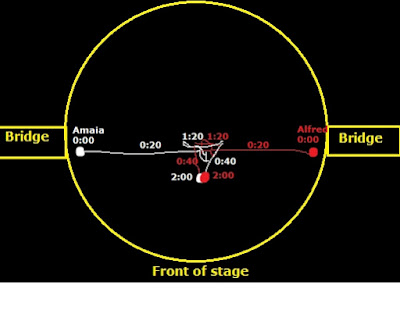 And from about 2:00 they're in each other's arms until the end.

Pre-opinion: This stood out in the UK final as the only confident performance and memorable song. It won't be so easy when the competition level is 100 times stronger. Hoping for a full blown storm effect with sprinkles in the arena and everything.

First run-through: SuRie is inside a dead whale skeleton made of LED and sharp angles. This looks really cool. Backing singers are off-stage, but they're really loud in the mix.

Second run: We have dry ice, and it looks like the whale skeleton is floating on a cloud. This is all very symmetrical, with the thing in the centre of the stage and SuRie in front of its centre - fans of symmetry will love this. She sings well but looks a bit lonely.

Pyro run: I only saw a bit of pyro during the last chorus, almost like a birthday cake firework.

I went to see Portugal (the country) and missed Portugal (the song). I'm in love with Lisbon, but my feet don't share that feeling. They cobblestone anything and everything, even inside the arena(!) 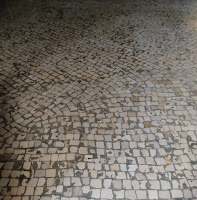 I am on the team of lovers of this song. I was a proud member of that team through the first part of this rehearsal too. However, the change of graphics after a while (going from cartoon-y illustrations of words from the lyrics, to psychedelic white/red and black patterns) made it look tacky, I'm afraid. Still love the song, but I'm hoping they will try out different visual endings and go for something else.

After the rest of the runs I'm even less convinced when it comes to the graphics.

Amaia is in a plain white trouser-suit and half white, half glittery shoes. Alfred has been talking to the Icelandic designer, and gone for a wine-red suit with a little miniature map in gold on one of the sleeves. Visually there are no major "special effects", they are rightly focusing on the two cuties on stage, who are looking at each other and holding each other.

The camera crew have some more rehearsing to do, but this is still looking good despite those few minor mistakes.

Third, last run and the camera work was good too!

SuRie is up on a platform in a white creation with very flared legs. She's in a tunnel of blinking squares as well, shifting between pink, purple, blue and turquoise. Yair has joined me, and I'm happy that;
1. he is here.
2. he is the one making skeleton associations today.

I like how this looks, dry ice, a tunnel and sparkler looking pyro in the end is a good combination. The song is too anonymous for me though.

Cláudia is in her (or someone else's) grandmothers over sized well washed nightie, showing the contours of her black bra and trousers/tights. She sings a little differently compared to how I have heard the song before in the studio version and from the NF, staying on the notes longer. I like that change!

The backingsinger is in black and turnes up unexpectedly, unless you're expecting her to turn up :)


Time for first rehearsals again, so we are kicked out of the arena and now waiting for the break to be over. Stay tuned, Portugal is next in line!

Meanwhile, in the Serbian press conference, the designer is being held accountable for the change of costumes. However, she did mention that some people, especially the bloggers at ESCnation, liked the liquorice worms so much that the delegation insisted on keeping some of it. Thank you Serbian delegation for reading our blog and taking our advice! 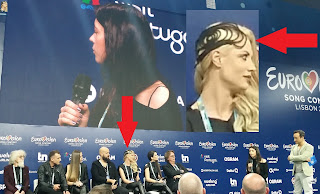 Liquorice worms in the hair.

Sounds and looks exactly the same to me. I will run over to the arena to see if the fake snow (which will probably still be a part of this performance, at least in the last run) is more convincing "in person"!

There was no fake snow this time. No real snow either. Thank you Rasmussen for reading our blog and taking our advice!

The song/performance is powerful from inside the arena. Writing press is allowed in at the very back of the hall, but there was still a good view from there. If you have tickets for the back rows for next week you will still be able to see the show well!

The famous Robot Nr. 4 is also my favourite, now presenting a sign saying "This is just a rehearsal", and a bit later, the sign "Justice for Valentina!", flashes by, which about 80% of the press centre found hilarious, yours truly included. Vocally, Jessika is struggling in all the runs today.

Outfits have changed. Jessika is in a short red glittery lace dress today, Jenifer also has different clothes compared to what we saw earlier this week. She is wearing a white sports bra looking top, white flighty trousers and a pink see through rain coat looking creation.

Oh no. The Serbian backing dancers/singers are no longer dressed in liquorice worms! The tops of the dresses are now completely black instead, with a discrete pattern. The fabric/design in a too bulky if you ask me. Sounding and looking the same apart from that.

Romania sounds and looks very similar to the previous rehearsals. However, we need some hair Product to make all the Little baby hairs that are now standing right up, behave. Unless it's the look they're going for, who knows, it might the the start of a new trend!?
Posted at 15:54:00 No comments:
Email ThisBlogThis!Share to TwitterShare to FacebookShare to Pinterest
Tagged: Denmark, rehearsal, Romania, San Marino, Serbia

Alexander apparently has the flu (according to sources around the press centre), which shows. He looks tired and sweaty as from a fever. He does still put out a lot of energy in his performance, so as long as the flu doesn't get any worse, I'm sure it's nothing that more make up won't fix.

The microphones are still on during the time between the runs, in the first break, Alexander was "trying to find the left one"... In the second break he seems eager to sing again, asking "Can we try it NOW?".

He stayed in key, but you could tell he had to struggle to hit the higher notes, especially during the last run through. Time for Alexander to get back to the hotel and rest, I think! And time for lunch for the rest of us. I'll be back in an hour.

The fans/press in the arena are cheering for Cyprus during set up, making our desk at the press centre giggle. As confident and over the top as before. For the on-screen "dragon in the knees effects" they are still trying different things. First run had the red fire balls at her knee level, for the second run there were yellow flames starting from her waist (and a bit higher than that during the third run). I think the latter version looked better.

The crew is now taking a few minutes to fix microphones, before Norway is on. The microphones are still on, I'll let you know if they accidentally say something interesting!

There was a slight problem with Ryan's microphone for the first couple of seconds. I could not spot any crew members this time though! Second run: the sound/microphone problem was fixed as well.

The ZiBBZ are sounding good today. The performance is super similar from the first rehearsal round, with the woman ZiBBZ standing on the bass drum at the end of the song.

The ratio between shots of the planks and shots of Sevak seems to have changed slightly, we now get more close ups of him. This makes it feel a bit more personal, which is never a bad idea.

Today I'll be your voice from the press centre/arena for the first part of the day. Yair also wants to see Portugal in day time! Like Yair did yesterday, I will focus on any news or changes from what we saw at the first rehearsals.

I went with Roger to visit Sintra yesterday, which was stunning. If you come to Lisbon and spend more than just a few Days, I definitely recommend a visit! 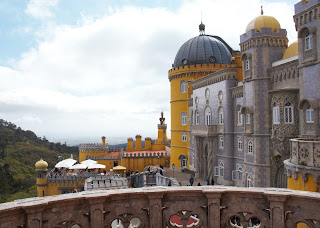