Posted by Yair
Now that I've seen them all, here's what I think of the current top 6 favourites to win's changes:

There seems to be a buzz around here for this song (and for him), and he's doing everything right so far, assuming he'll beat the cold by then. But will the professional juries, many of them songwriters, appreciate being told how to do their job?

This really improved for me watching the rehearsal (I'm not sure what they're doing different, it's the same dress) and the ESC Nation team has been humming it all over the narrow alleys of Alfama. But I mustn't forget the first impression of the song, and it's not boding well for it.

There seems to be a new and stronger than ever buzz around this, under the assumption that he'll defy his doctor's orders and give his best in the final. I still think the routine is a bit messy and the song a bit too weak to make it though.

This combines what the last two winners had: The sad-happy song with a modern club backing track of 1944, and Salvador's clever use of the audience for the full effect. Plus a really, really good song. I fear that Émilie's charisma isn't big enough to win this, especially when she's up against someone like Netta.

Posted at 20:17:00 No comments:
Email ThisBlogThis!Share to TwitterShare to FacebookShare to Pinterest

Super effective on screen again. Less so inside the arena, because some of the visuals are intended for the overhead camera shot. Also, it smells like Chinese food in here. #ProhibitedItemsScandal

Still doing what I hoped they wouldn't. If I were to write something nice about this, there's a really nice shot of Lea & co with the audience behind them near the end. But it takes a long time to get there.

The fish scale jacket and trainer shoes are still there. Vanja sings well when he wants to, but at parts he just doesn't bother. It's hard to tell if he's taking himself (and his song) seriously.

There are gondolas going outside the arena, so we went on one of them. Really nice view of the bay, round trip is €5.90. Much recommended. 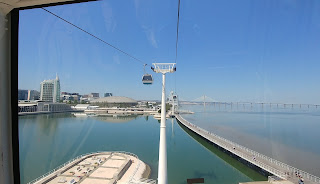 Music stopped after 20 seconds, now we're hearing "I have time to go to the toilet?". Properly started after less than a minute, so I guess it's a no. A similar act to what we've seen. In the arena, this is electrifying and I finally got my first goosebumps of the year with the pyro during the bridge (am I that superficial - or was it that good?)

The on-screen heart is now about where Christabelle's liver is, still not anatomically correct but less disturbing than in the mouth. In the arena, the LED shower and laser show is spectacular, audience is in for a treat. Dancer now appears in the shower much later than in the first rehearsal, which was a good decision I think. A good rehearsal for Malta, but it would be better without the pyro.

More bad vocals. Either everyone partied late last night, or you should warn your non-fan guests on Thursday. Can crowd energy save this?
Posted at 15:32:00 No comments:
Email ThisBlogThis!Share to TwitterShare to FacebookShare to Pinterest
Tagged: Hungary, Latvia, Malta, Poland, rehearsal

Small improvements on the camera angles, but they still look like it's their first time on TV. Think of this, only with a better song and better vocals:

The dress is still here. Still too many camera switches (at some part of the song, every time the drum beats), and some ouch notes there. I still really like it, but their best hope is that juries are as forgiving to Australian vocals as they were last year.

I still don't like the song, the routine, or anything made of leopard, but here's a few things it has going for it:

Didn't improve, because it didn't need to. People loved it.

Watching this in the arena, in which the acoustics made everything sound good so far, but not this. More focus on the three backing singers this time, and there's an on-screen exploding snow effect during the first chorus. Three people applauded. Julia is rolled out with her volcano as the Moldovan prop rolls in.

Last night did not go well. Food ordered at 20:30 and arrived at 22:00, bill took another hour. This country has a pace of its own. Then I got an urgent message from the Belgian press that I left a mouse and a sock at the press centre. Oops.
Posted at 12:30:00 No comments:
Email ThisBlogThis!Share to TwitterShare to FacebookShare to Pinterest
Tagged: Australia, Georgia, Moldova, Netherlands, rehearsal, Russia
Newer Posts Older Posts Home
Subscribe to: Posts (Atom)