Email ThisBlogThis!Share to TwitterShare to FacebookShare to Pinterest
Tagged: predictions

Printable scoresheets for the semi finals

The graphic chef PoLLe has created high quality scoresheets for both semis. They look like this:

So if you're one of the lucky ones to have printer access in 2021, you can download them here in high quality PDFs. Enjoy the show!

Email ThisBlogThis!Share to TwitterShare to FacebookShare to Pinterest
Tagged: scoresheets

Fishy Predictions for the First Semi-Final

Posted by Sild
It's been a long two years, but finally a Eurovision Day has come again! 🥂 For the first time in over 15 years I won't be spending it on location or in Syden, but rather in a rainy (shocker) Bergen, but I'm not planning on letting that dampen the mood!
I've been twisting my slightly May 17th affected head to see if I could not only figure out which ten countries will qualify tonight, but also which order they'll actually turn out to have placed in, once we get ALL TEH INFO some time after Måneskin's Destiny's Fyr & Flamme's thank you speech very very early Sunday morning. So enjoy my mistakes, but most of all enjoy the show, because Eurovision is back!
1 Malta | It was my main contender for the win before the rehearsals started, but seems to have faded a little compared to the likes of Italy and France, and due to boots and wigs and colour debates. (My take: If in doubt, always go for the brightest colour!) I still think it has a chance on Saturday though - and certainly tonight.
2 Ukraine | That bit where it slows down and builds and builds and builds to PLING * POW * RUN gets all my geese out bumping every single time!

3 Cyprus | Solid feels like the word best describing this, I'm expecting it do to very decently with both juries and televoters, without anyone getting overly excited.
4 Russia | My favourite in this semifinal, but probably a bit too odd to go higher.
5 Lithuania | Had its moment to shine when it came out in January, but gosh, it feels like years ago... Still very obviously qualifying, still very obviously getting the 12 from Norwegian televoters tonight.
6 Israel | This keeps getting stuck in my head, which should be good. But seeing as there's no natural flow between all those individual bits of song, it just ends up being one little bit in an eternal loop I can't get out of, and I end up considering a head amputation to get rid of it. I've had it down as my tip for 'forgotten and ignored, accidental last place' in the semi for much of the season, but Eden and her boys are selling it well, so suddenly it feels like a qualifier, and somehow even a safer one than the following bunch.

7 Norway | I can never quite decide whether I think Tix is annoying, nice, manipulative, a hero, or just a combination of all, but at the end of the day I really do like the song.
8 Belgium | It's mix of boring, pretentious, dark, nostril and grumpy. It's Belgian speciality, you will enjoy.
9 Azerbaijan | If it hadn't been for the last 30 seconds of pyro extravaganza I'd say this was as dead as the Tix+Efendi relationship will be next week.

10 Romania | I originally had Sweden instead of this, but seeing as almost everyone else seem to have the same ten as me, I figured it was time for some risk-taking. And I can somehow see this working on some level for some people, despite the mainly quite awful singing.
11 Sweden | The exact opposite of Norway and Tix - I'm sure I like Tusse, but the song... Surely juries can't be quite as forgiving about Swedish averageness as they have been the last few years? And thinking back about it, I actually think both 2019 and 2018 are very good songs, so it shouldn't really be comparable at all. Could they possibly lose out...?
12 Slovenia | Probably getting 15 televote points in total, all from Croatia and North Macedonia, but I can see some juries appreciating the loudness here.
13 Ireland | I've been hoping and thinking this should make it all season, but no, it just isn't working, is it... What could've been a joyous, confident anthem of finding one's way in life just ends up being poor Lesley getting lost in a paper forest.
14 Croatia | I don't feel hate, but why would anyone vote for this when there are better songs, better singers, better dancers, better stagings, better backdrops... Even the other Tick Tock is better - a far worse song, but at least it had #hamsterbutt. 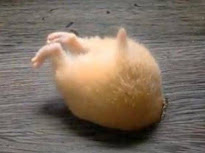 15 Australia | Very interesting entry, and I really appreciate it being there and Montaigne seems great when she's not dressing up as a clown. Just such a shame it's not, like, you know, good.
16 North Macedonia | I don't think they could've done much better with this than what they're doing on stage, but it's still the same song, so... I miss You :-(