Posted by Sild
I may have had a little bit of wine last night, so I'm happy Yair covered Germany.

Onwards and upwards for the last three finalists from a fishy view - you know the drill with rolling and updating etc!
🇪🇸 | Spain
Hey BBC, watch and learn, this is how you stage a hopeless entry!
Apart from one pretty itchy big note towards the end, I have very little to criticise here. The acapella start works very well, pulls you in and makes it feel more intimate, and creates more development in the song too, which I've always felt it has been lacking. For the first verse and chorus everything is dark and blue and there's a solar eclipse on the backdrop, but then suddenly the moon is rising! Or falling...? I'd seen the photos from the first rehearsal, but I assumed the moon was just on the backdrop, not a massive ball being lowered right there behind him!
I don't think I've ever seen Blas's hair as flat as this, has he been on the wine too? Or is there a hairspray shortage?
The awful note was either improved or avoided (he does seem to improvise a bit each time for the howls towards the end), so for the last ever technical rehearsal of Eurovision 2021, I officially have nothing to criticise, what's that all about?! The song will obviously do next to nothing in a week, but Blas and Spain have every reason to be pleased with that.
🇬🇧 | United Kingdom
How looks his trumpet, you ask? Big, I say.

Not sure what more to say about this, to be honest... The massive trumpets pointing at him on his plinth feel a bit threatening, it stresses me out a little as I feel like something loud is about to happen any time. And then in the end I'm kinda disappointed it doesn't.
For the instrumental bits the cameras focus on the "musicians" "playing" on their instruments, and I think that part works decently well, certainly better than the usual UK Eurovision "here's some backing singers in a row doing slight knee-dancing along with the beat". James sings well enough and seems nice enough (and as we know he makes a kickass bacon sandwich), but I honestly can't see this getting a single televote point from anywhere else than a greenish isle with confusing seasons.
There's a third run, but instead of hearing James singing, we now got a baby crying and lots of people chitchatting over the backing track, big improvement!
🇫🇷 | France
Some connection issues meant I only saw the last minute of the first run-through, when she's all happy and the song is faster, and I sure hope the two minutes before sets the mood a bit better than that... This bit almost felt ridiculous and awkward, with the camera swaying (?) or shaking (?), her waving hands casting massive shadows all over her face and generally just sounding like a Yoplait advert.
A full run indeed makes far more sense (shocker!), and also makes the last part of the performance fit in, with the song slowly building to that combination of happiness and desperation. Personally I find the song quite uninteresting and repetitive, and Barbara seems a bit like that girl on the first row at school that never forgot to do her homework, but they're doing everything right with it here, and the whole solitariness and simple and dark staging makes it stand out a mile.
There's some really striking shots in it, so look out for those - one from above where her shadow suddenly explodes into lots of birds, then with the floor being made out of little stars and she's basically floating on it, like in the French final. And my favourite one, for some reason, is a little close-up on her hand.
Posted at 11:48:00 No comments:
Email ThisBlogThis!Share to TwitterShare to FacebookShare to Pinterest

Good morning from the Irish extension of the press centre! Sild and myself will bring you live reports of the last day of technical rehearsals, while Jordy is back in the arena taking videos. He's allowed to post a combined total of 2 minutes - if you have any special request, please put them on our message board! (personally I'm hoping for a Blas howling compilation)

Starts off with Jeangu doing his sexy moves and surrounded by two backing singers and it's just fine, and then when he sings the title a red dancer appears very close to the camera quite awkwardly - at first I wasn't sure if they were meant to be there or is just a stage invader / photobomber. Rather confusing.

The dancer in red seems to be still there after a while and even interacts with the rest of the team, so I guess it's intended. I'm sure it means something very deep and important, but I'm not quite sure it's working.

Vocally I cannot fault Jeangu - he's flawless at every runthrough and sounds very pleasant too. And he's quite charismatic too. If anything's going to save this rather messy staging, it's him.

Third runthrough and I'm enjoying it more, possibly because I knew what to expect. Over to Sild for the next three finalists.

If you take the LED background of La Venda and replace Miki with Plastic Bertrand, this should give you a clear idea of what to expect. It's obvious that Jendrik isn't a professional singer, struggling to keep up with his own song and becoming out of breath, but I guess none of this would matter for the target audience of this. He does have charisma and enjoys it, which is perhaps more important here.

Oh, and it seems he gave up on Dutch and speaks German again. I think.

Despite his best effort, I don't feel hate towards this. I just feel "aww, overexcited non-singer gets to be on a Eurovision stage! How lovely for him! As long as there's just one of these..."

Also, I can confirm that all colours on my rather old TV work. Good to know.

After so many favourites sabotaged by SJB, it's nice to see a performance that's just, well - a performance, focusing on the band's skills that we already know they have. There's a good play of lights (black and white at first, then turning to a red theme during the "parla.." bit, and near the end changing to blue and red again) and silhouettes on the background, but mostly the focus is on the band, as it should be.

Third runthrough and first goosebumps moment for me this year with the pyro. At first it's a curtain and then it's EVERYWHERE... OMG OMG OMG OMG OMG SOOOOO GOOOOD OMG OMG 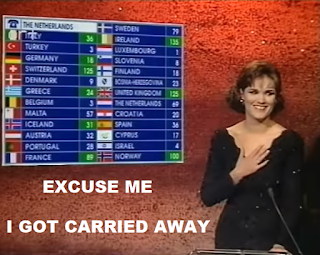 But anyway, yeah, this should do as well as this song can, whatever that means.