Posted by Sild
Like Jonas, I saw the first dress rehearsal from the arena, and as he's gone through most of it, and Yami will give us a thorough review of the second one shortly, I won't go into detail, but will give you some of my main impressions on it, compared to what we've seen before.

- Belgium sounded very good in the hall, for some reason, and I've never particularly liked it. It came across as much punchier and louder than I've experienced it before. Could it just be the sound in the arena?

- I wasn't very impressed at Russia when it was on, but it still somehow made Ukraine sound a bit *flump* after it. Ukraine, however, have a great clip in the first recap.

- Netherlands comes across as a breath of fresh air after Ukraine.

- The little films during breaks are good - Lynda Woodruff, Australia's interest in Eurovision and especially the little history lesson.

- As Jonas wrote below, the finalists are not shown with their preview videos this year, but different clips. I think it's their postcards, actually, which is a very good idea - much better than the randomness of a few performances, a cheap video, a proper video etc, that we normally get.

- And on that note, the postcards in general are looking great, letting us get to know the singers.
Posted at 20:53:00 1 comment:

Next there is a video bit about Eurovision in Australia. Yes, really. Both quite funny and interesting,actually.

Despoina did her thing well enough. And oh, the broken light has now been fixed. That was about the most interesting bit of this...

Belgium had a few out of tune moments at the start but then shaped up. It still looks a bit grey and dull visually, but the dancing seems a tad more in sync than before

Oh, and sorry for any typos I might make, and for not doing a more extensive report. The wifi in the hall isnt great and we are lacking laptops, so this is all typed on my phone :-) But Yair promises a more detailed report from tonight's rehearsal.

Serbia now, vocally fine and seemed to go down well with the audience present. And Petra just called them "Moe dje three". She's now announcing that the lines are open. And we get the first recap of the night!

Which they had to stop and start over, because it had the semi 2 graphics. Calling Hannah "Esma" and all..

Most songs seem to have chosen quite logical bits of the songs for their 20 seconds. The chorus, that is. Except Moldova which had the middle 8.

Now Petra in the greenroom. Which is in a different building. And looks huge.

Followed by a mini documentary about the history of Eurovision. With Petra appearing in some of the clips.

After a second recap the lines are closed and we move on to an interval on the stage. Random dancing around a large cardboard tree. It's all quite dark and looks very early 80s sci fi. The music kinda adds to it. Seems like another one of those typical Eurovision interval acts that the producers and choreographers are proud of and think is amazing, but everyone else forgets once it's over.

This is followed by showing bits of the six songs already in the final. Most of them NOT the preview videos, but other videos. Then waving to Bonnie and Marco and Robin in the audience.

Now a recap of all the ten qualifiers. Or winners, as Petra calls them.

Then back to Petra, basically saying goodnight. Show is over

Email ThisBlogThis!Share to TwitterShare to FacebookShare to Pinterest
Tagged: Rehearsals

We are seated in the arena and arw waiting for the first dress rehearsal to start.

Theres some sort of bridge installed in the arena now. Connecting the back of the hall with the stage. Kids are standing on it, being part of the opening, probably

Surprisingly, the show starts with Euphoria. First a video of folk versions of it, from apround Europe. Then kids singing it. And lots of sign language. (How original). Eventually Loreen walks onto the bridge in a Kate Bush-dress.

Petra appears, in a shiny mermaid dress. Sounding a bit shouty right now. She speaks some french as well.

Not gonna blog too much about the songs, unless there is anything new. But the postcards are really nice, featuring the singers. I can also report that the sound in the hall is really good.

Austria, Estonia and Slovenia passed by without any problems. Birgit got a spontaneous applause when she did the high note.

Croatia sounded a bit weird on the hall, as if the volumes of their mics were not right. But I assume it wont be like that on tv.
Denmark is what it always was.

Petra back on stage, joking about the slogans that were rejected for "We are one". One of them being "Don't complain, it's even more expensive in Norway"

No surprise with Russia. But Zlata sang one line and then stopped. It seems like the giant ripped off her microphone cable or somthing. Now they are starting again. Oh, and Zlata is in a new dress. A very boring peachy thing.

Anouk still ignores the cameras, but sings great. One of the stage floor lights seems to be broken and keeps flashing in pink... hmm

The light kept going crazy throughout Montenegro (which was fine) and then it seems like they fixed it (or just unplugged it) but now during Lithuania it's wonky again. It's right at the front of the stage, so quite noticeable. Possibly it was the giant that broke it as well?

Speaking of Lithuania, vocally he was fine. While Belarus is a bit shaky, for some reason. (Too much partying?) But looks good in the hall though.
Not sure if the moldovans are more happy, but not much has changed in the performance. Her dress stays red more or less throughout the song, and she still grows tall.

Ireland seemed like something that will come across well in the hall when there is a real audience.

Posted by Sild
As you all probably remember, Irish singer Ryan Dolan suggested the infamous hamster was hovering when we had a little chat with him at the Irish party the other day. It was a good suggestion, but we felt the issue needed further investigation, and who else to turn to than to the boss himself, Ruler of All Things Eurovision (or something), Christer Björkman? 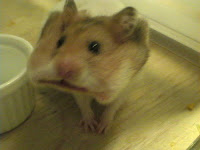 Just like young mister Dolan, Björkman seemed a bit befuddled by the question, but eager and intrigued to find out. After thorough consideration, he reached the conclusion it had to have a swallowed a copy of the record of his very own Eurovision entry in Malmö back in 1992, I morgon är en annan dag. This could actually be the case. Or could it have attacked one of the paintings the 'she' in the lyrics of his entry painted, that he never got to see? No wonder he never got to see them, really, if the hamster had the munchies all the time... 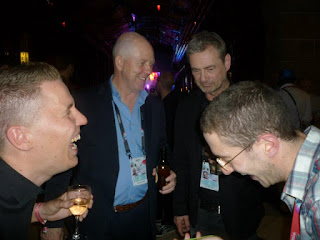 As we were about to thank Christer for his kind cooperation in solving this important mystery, he said he had to show it to his colleague, viewing room producer Stuart Barlow, and called him over. He suggested the hamster had been "hit by an iron" - which sounds harsh, but might well be the truth.

While doing our research about this Stuart, as proper faux press always should, we also realised he's a great Nina Žižić impersonator, as shown in this video. We approve. Just a pity we didn't have our dubstep sign at the ready.
Posted at 14:08:00 No comments: