Posted by SamB
Good afternoon! I was actually supposed to be blogging this morning's rehearsals, but due to far too much wine last night and an epic hangover this morning, I only got here for the end of Armenia. As punishment, I've been put on duty this afternoon, which means I get the pleasure of listening to Romania four times in a row.

(For what it's worth, I blame Ireland entirely. You've already read about the free drinks at their party, and then I had my last round of drinks at Euroclub bought for me by the lovely Stuart O'Connor, the producer behind the Irish entry. And then I ended up having a conversation with hot-dancer-Alan, the content of which I have no recollection of. Oh dear...)

NORWAY
The most important thing we were waiting to hear in this rehearsal was how the Norwegians would cope with replicating the multi-layered vocal track from the studio version in the live setting. Thankfully, the answer to that is 'very well'. Margaret is joined on stage by three backing vocalists, but other than that the staging is much the same as in the Norwegian final, with a single drummer off to one side and Margaret alone up front.

Margaret is wearing a very similar white dress to the one in the Norwegian final, and the background is suitably dark and electronic-looking. There are a lot of shots from the back of the stage, which look a bit odd now, but will be very effective with an arena full of fans.

Overall, I'd say it's coming across very well, and the Norwegians have got everything right with the staging. Still a potential winner? Maybe...

ALBANIA
You'll be shocked, I'm sure, to hear that the colour scheme here is red. Red and black, with some yellow lights. Sofabet have written numerous pieces on the effects of red and black lighting to an act's chance on The X Factor UK, the general conclusion being that it's the colour scheme the producers use when they want rid of someone, as it has a vote dampening effect.

It would be hard to do a similar study on Eurovision, since Albania are almost the only country to use red and black. It worked for 'Suus' though. The effect here is pretty striking, and it certainly stands out from what's come before.

Albania have placed Adrian and Bledar up front, with four backing musicians behind on high podiums, including two guitarists and a man with some very big drums. I do think opening the song on the remarkably un-telegenic Bledar is a mistake - he really doesn't come across well on camera, and seems to barely know where he is at times. After his verse he mainly ambles around at the side before positively skipping down to the end of the catwalk for his guitar solo, which comes complete with obligatory close-ups of his frets.

I like the Albanian song a lot, and they're giving it everything, but I'm really not convinced it comes across here. It's fighting with Armenia for some of the same votes, and I wouldn't be at all surprised if it were Albania that misses out.

The final run-through added a whole fuckload of fire and pyro, including a stream of sparks from Bledar's guitar during his solo. It looks great, but if you're standing down at the front on Thursday, be warned - it's going to get hot!

GEORGIA
Big cheers in the press centre for this one, though I'm mostly disappointed that Sophie only has simple ear-studs in so I can't use my Noddy and Big Earrings joke again.

Nodi wears a black suit, with Sophie in a flowing white dress. Either they're going for a wedding theme with the styling here, or they're just huge fans of 'Apopse as vrethoume'. 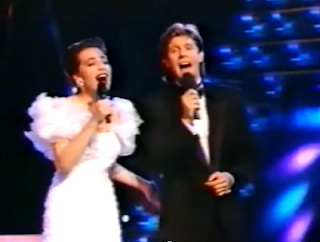 On the first run-through it's vocally a little wobbly, particularly early on, and neither performer is quite sure of their positioning just yet. The last minute is great though, and there's clearly going to be some effect, or huge shower of sparks at least, that we aren't seeing just yet. That might be why we've been waiting more than ten minutes for the second run-through - or perhaps someone just forgot to turn the screens on.

Aha, here we go now! No effect still, but the whole thing was much more assured, and excellent vocally. I even went all goosebumpy, and I don't even really like the song that much!

The third run-through (which will also be the last) adds some very effective dry ice at the beginning, with great use of spotlighting. And going into the key-change we get some very loud hissy plumes of smoke, before the expected Running-Scared-curtain-of-sparks, which is actually surprisingly uneffective - most of the sparks fizzled out well before they reached the floor. They'll obviously hope for a little better next time.

Overall, a strong rehearsal, with a few kinks to be ironed out. My instinct is that it isn't really a winner. It's going for a lot of the same votes as 'Running Scared' got, and will get many of them, but in a year with more clear contenders, I don't see it topping the scoreboard. But it's a safe qualifier, and probably sailing into a typical Georgian result.

SWITZERLAND
There's something of the family band about Takasa. Brother and sister on lead vocals, dad on the trumpet, slightly batty aunt with a big drum, granddad on the double bass and sexy, bad-boy cousin on the guitar.

The performance is much the same as in the Swiss final, with all six in a line at the front of the stage. The uniforms are gone, replaced by black trousers and white shirts bearing a 'together we're one' motif, which have much the same effect. There's some ineffectual attempts at 'spontaneous' interaction, particularly between the girl and the granddad, which all too often involves her wandering out of her shot. Stick to the script! And then there's some cuddly stuff in the middle, which is all a bit creepy if you bought the family-band scenario.

As expected, it's pretty static, and there's not much happening behind them either - wood effects on the backdrop. They're all singing well and the harmonies are well mixed, important for this song. Borderline qualifier based on this, I'd say.

ROMANIA
(Margh, I just wrote this and then Blogger ate it. Bastard.)

Gales of laughter greeted the first shot of a sweaty Cezar, dressed in his oversized sparkly black jacket, complete with huge shoulder-pads and a neckline that Moran Mazor would be proud of. He's surrounded by swathes of red fabric, from which three dancers emerge and perform what might generously be termed 'interpretive dance'. Cezar goes up-up-up-up-up-up-up for the last chorus, just like Aliona did the other day, and it's fair to say that it was much more effective for Moldova. At the end, the dancers get on each others' shoulders, draped in the fabric, and... god, I don't know...

They're doing the right thing here, making the whole thing quite ridiculous, and focussing on the routine and the 'circus' of the whole thing, rather than Cezar himself and his vocals. For his part, Cezar sings... not well, as such, but... he's singing it like he's supposed to be singing it.

It's horrible, obviously, but it really stands out, and is probably sailing through the semi.
Posted at 16:29:00